Torgue-o! Torgue-o! is an optional mission in Borderlands: The Pre-Sequel.

Springs offers Probe for use during this mission. Near the warehouse there are a pair of Peaceful Kraggons that are non-hostile. Using the weapon to antagonize them, the kraggons can be coaxed into rolling into the rubble that blocks entrance to the warehouse. The kraggons must roll into the rubble twice before it is destroyed, at which point the light reactor can be obtained.

Torgue intercepts at this point and requests that instead of the light reactor being returned to Janey, it should be rolled off a nearby bridge into lava instead.

Returning the light reactor to Springs rewards the Firestarta, whilst destroying it for Torgue rewards the Torguemada.

"Lasers and explosions... there was really no downside to this, was there?"

Turn In: Spring's Bounty Board OR Torgue Rocket 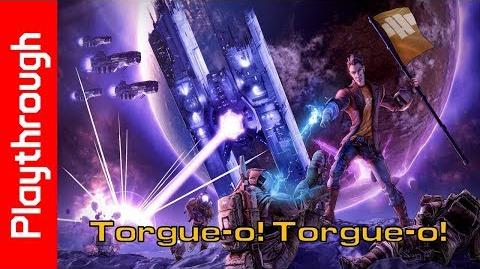