For the eponymous CEO of the Torgue corporation, see Mr. Torgue.

Torgue is a weapons manufacturer. This manufacturer's guns can easily be identified by their black, grey or gunmetal paint schemes and heavy construction – a stark contrast to many other manufacturers who have much brighter colour schemes for their weapons.

Torgue seems to follow an often violent naming scheme for their weapons. In Borderlands 2, the names for many of Torgue's weapons have a sexual connotation.

Torgue makes above average quality firearms, and are more common than the Atlas Corporation's weapons. They make good shotguns, heavy machineguns and sniper rifles. They tend not to excel in any one area – they might not have the astounding accuracy of a Hyperion or the raw power of a Jakobs – but instead are well-rounded.

It is also discovered during Firepower: Plight Of The Middle Man that Torgue is supplying weapons directly to the bandits, which greatly annoys Marcus Kincaid.

Oddly, for their constant needling of Jakobs for their use of wood in their guns, Torgue fabricates various plywood boards found throughout New Haven and Old Haven.

In Borderlands 2, Torgue's main defining feature on all of their guns is explosive bullets. They also have stopped making sniper rifles and SMGs, instead focusing on powerful yet somewhat inaccurate rocket launchers, pistols, shotguns & assault rifles. Their rocket launchers and shotguns are among the most powerful in Borderlands 2. They also have a much more striking and definitive paint scheme that incorporates racing checker stripes. The lower tier/more common Torgue guns use a very industrial and brutal looking green and yellow paint scheme that feature yellow and black checkers, while the higher tier Torgue weapons are identified with a flashy silver and red paint scheme with black and white checkers.

In Borderlands 2 it is revealed that the Torgue corporation was founded by Mister Torgue High-Five Flexington. Mister Torgue serves as the company's CEO and spokesperson

The following are made by Torgue.

The following are items made by Torgue.

¹ This set of prefix is only obtainable through Tiny Tina's Assault on Dragon Keep.
¹ +There are only two weapon by Torgue, called the SWORDSPLOSION!!! and Unicornsplosion. These two are all unique weapons which means that their skins are exclusive to themselves, due to a lack of other non-unique Torgue E-tech weapons.
³ Since the only Seraph weapons made by Torgue include the Seeker, Ahab and the Devastator, they can only be obtainable through Captain Scarlett and Her Pirate's Booty (Ahab and Devastator) and Tiny Tina's Assault on Dragon Keep (Seeker).
₄ The Tunguska requires the Ultimate Vault Hunter Upgrade Pack. The Carnage requires the Digistruct Peak Challenge expansion pack.

Because the additional damage of the gyrojet variants is not stated on the weapon card the only way to figure it is testing the weapon (for example in the Sanctuary dummy). It's not uncommon that a gyrojet weapon with, for example, 300 damage listed on the card does more damage than a 1000 damage folding fin rocket weapon because of the additional area explosive effect.

Gyrojet ammunition starts to drop with range. Up to medium-long range this effect is negligible. At extreme ranges, this can throw your aim off. In special situations it can be used to deliver indirect fire from cover in a similar Fashion to Hail.

Torgue weapons are highly effective against Nomad Taskmasters and other physically shielded enemies, because they move pretty slow and the splash damage can damage them through the shields (Dealing reduced damage). However against fast enemies or aerial enemies they are ineffective, except for the Seeker's homing gyrojets. 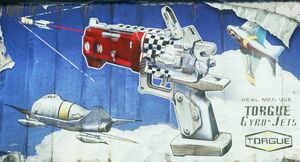 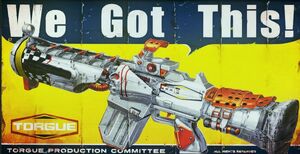 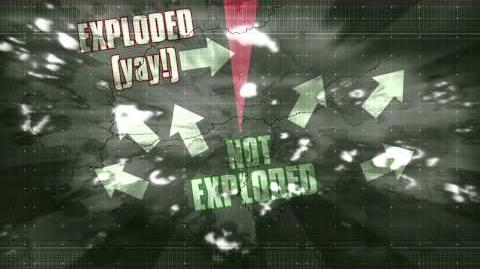 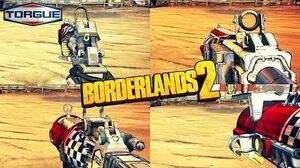 In addition to their full range of common Pistols, Assault Rifles, Shotguns, and Rocket Launchers, Torgue products in BLTPS include items listed below.

Torgue weapons use the same prefixes as in Borderlands 2.

Torgue weapons are essentially unchanged from Borderlands 2 as they do not use the newly introduced cryo element. However, as all frozen enemies take +200% damage from explosive weapons or critical hits, Torgue weapons can easily deal five times the damage with a critical hit.

Torgue weapons, akin to Borderlands 2, are always explosive and deal splash damage. However, because Explosive is no longer an element, they can now spawn in any element. Torgue makes use of the new alternative fire with two modes: Impact and sticky, found on all Torgue weapons except those with an alien barrel and certain unique and legendary models. These two modes have different properties which change how the bullets behave and can be toggled for different situations.

Impact bullets deal splash damage to all enemies in its blast radius upon contact with any surface. The size of the radius depends on the weapon type, with rocket launchers being the largest and pistols being the smallest, although this can be modified by various stat boosts. Impact bullets travel slowly and have a higher chance to knock enemies away, rendering them fully harmless while they ragdoll into the air.

In sticky mode, the weapon will fire gyrojets that attach to a target, dealing 10% the stated weapon damage, and then deal the remaining 90% upon detonation. Sticky rounds can be detonated by reloading, switching firing modes, or changing weapons. These rounds will all explode in sequential order, and each one counts as a separate hit. The stacking bonus damage is determined by the weapon's magazine part, with smaller magazines dealing more per stack (with some exceptions). This bonus is only applied upon direct hits with an enemy, and does not factor in other enemies which may have been hit with stickies. Variants that consume multiple ammo per shot will have this bonus divided evenly among projectiles for the same total bonus if all projectiles hit. Sticky rounds will expire after a short while, disappearing without detonating. This can also happen when too many sticky rounds are active at one time. Sticky bullets also have the benefit of traveling faster and weapon fire rate is increased in sticky mode, making it more useful for long range engagements.

Retrieved from "https://borderlands.fandom.com/wiki/Torgue?oldid=480555"
Community content is available under CC-BY-SA unless otherwise noted.