Too Close For Missiles

Too Close For Missiles is an optional mission in Borderlands 2 given by Loggins. It becomes available after Hunting the Firehawk is complete.

"An ex-gyro pilot named Loggins has been kicked out of his flight squad in The Dust. He's asked you to enact [an admittedly roundabout] revenge on them by destroying the volleyball they use to blow off steam in between air raids. Don't forget a fire or explosive weapon to finish the job!"

Help Loggins get revenge on the gyro pilots.

The objectives are in the Goose's Roost, which can be accessed by jumping a vehicle in using rock spikes as a ramp. The camp is infested with bandits and buzzards in a close-quarters environment.

Once everything has been gathered, the volleyball net is then doused with flammable gas and set alight with an incendiary weapon. This draws the attention of several Shirtless Men, who will attack for burning their volleyball net. Killing them completes the mission objectives.

"Several years ago, the bandits of The Dust established an elite school for the top one percent of its pilots. Its purpose was to teach the lost art of aerial combat and to ensure that the handful of men who survived were the best gyro pilots in the world. They succeeded. Today, the people of Pandora call it Gyro Training Camp. The flyers call it: THAT PLACE WE GO TO PLAY VOLLEYBALL." 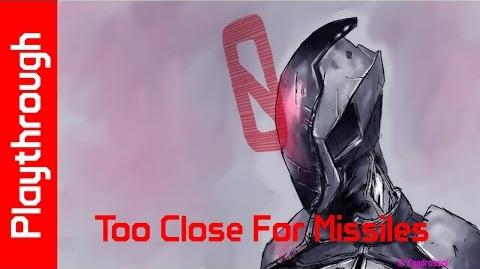 Too Close For Missiles

Retrieved from "https://borderlands.fandom.com/wiki/Too_Close_For_Missiles?oldid=432409"
Community content is available under CC-BY-SA unless otherwise noted.