Today's Lesson: High Explosives is an optional mission in Borderlands given by Crazy Earl. It becomes available after Get Off My Lawn! is complete.

"Those bandit assholes stole my C-Charges! The explosives must be around their camp somewhere. You're gonna teach them a lesson. They want my C-Charges? Fine. We'll shove 'em up their asses and set 'em off. You steal Earl's stuff, you get blasted to hell." 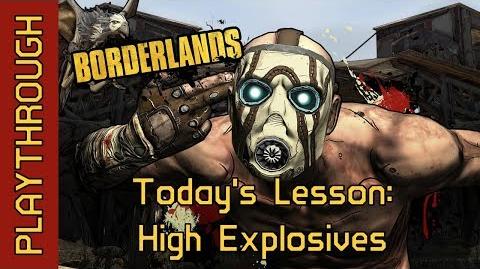 Collect Earl's C-Charges, then plant them and set them off.

Crazy Earl is mad at bandits and wants retribution. Bandits stole his C-Charge, so he wants them killed with it. After accepting the mission, start heading deeper into the scrapyard. Immediately, 3 spiderants will emerge and attack. Keep heading straight, passing some bandits near a weapon chest. After, you will come out to a walkway overlooking a new area. Make a long jump to reach Red Chest sitting on a platform, jump back, and head down the walkway to the revive point. From here, go around the north end of this area in order to reach more bandits and the C4.

Further down the path, there is a barricade with a revive point on top, guarded by some bandits. Go on top and jump over it. Stay along the left wall of this area and in the second bandit house, in the southern tip of the scrapyard, is the C-Charge. It is located in the open warehouse type building, on a box outside. Keep moving forward and head up the ramp up onto some walkways. Take the first left, heading up more. Turn left again and head straight; go through a house with 2 lockers outside and onto a large platform. Kill any bandits found there. Follow the waypoint to the C-Charge plant location on the platform and step back as it blows up. Before heading back, there are two red chests made accessible by the explosion. Head back to Crazy Earl for the reward.

"Hah! Taught those bandits a lesson for sure! Looks like you got a little singed, yourself. Oh, that's right! I had those charges and timers set for remote detonation! I could've done it from here, with the push of a button, but I totally forgot! That's friggin' hilarious!"