To the Moon is an optional mission in Borderlands: The Pre-Sequel.

"Jack has an idea. A terrible, awful, splendid idea."

This mission is available from the southeast bounty board in the Lunar Launching Station.

Jack wishes to further test sending humans to the moon via moonshot, and a nearby Lost Legion defector is the perfect candidate. Once located at the compass way-point, the defector can be offered the opportunity to test the theory.

When he refuses, a way to entice him into the moonshot container must be found. A nearby console, when activated, will create the illusion of a pizza party inside the container, tricking the soldier into entering. When the soldier enters, Jack seals the container. Activating the same console again will digistruct an experimental targeting beacon onto the container.

The container is then escorted up to the landing and onto the conveyor leading to the moonshot cannon. As it starts moving toward the cannon, the defector declares he has been captured and requests help. Numerous Lost Legion Marines will appear and attempt to destroy the targeting beacon, which must be defended. If the beacon is destroyed, the mission will fail after the container is launched.

When the container successfully makes it to the moonshot cannon with its tracking beacon intact, it can then be fired from a console on the upper landing area. The mission can then be turned in, or for the optional objective to investigate the landing site to be completed first.

The landing site is at Chunder's Hole in Triton Flats, inside a building that must be accessed by the hole the container made in the roof when it impacted. There, the test is found to be a failure and the defector dead. The mission can then be turned in back at the bounty board. Because all ground entrances are sealed, vault hunters are required to double-jump from a nearby container and into the hole of the house. Inside, there are several lootable objects, including two rectangular chests and one Dahl large chest. A sealed entrance can be opened from the inside of the building for an exit.

"At least Jack didn't ask YOU to get in the Moonshot Cannon. Again." 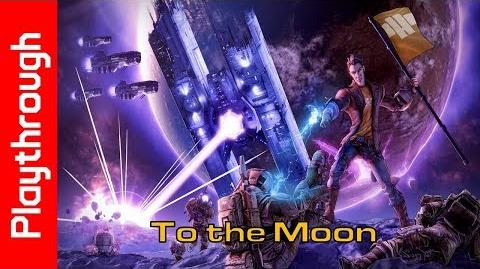 To the Moon
Retrieved from "https://borderlands.fandom.com/wiki/To_the_Moon?oldid=443884"
Community content is available under CC-BY-SA unless otherwise noted.