To Grandmother's House We Go

To Grandmother's House We Go is an optional mission in Borderlands 2, in which you are rewarded a player skin.

Handsome Jack wants a Vault Hunter to go check on his grandmother in her cottage in the Eridium Blight, and offers an assurance that he is not leading them into some kind of trap. His grandmother's cottage is a short drive away on the far side of the Slag Scar, and beyond the fence the final approach must be completed on foot. Flowers for the optional objective can be found as far down the hill as the gate, but the last of them are beside the cottage itself.

When the cottage is approached it becomes evident that bandits have attacked the place. Jack sends a transmission, pleading for the bandits to be killed and to see if his grandmother is safe. A final bandit, a goliath is also hiding inside the house and will drop from the ceiling and attack the first Vault Hunter to go inside.

Jack's grandmother, it turns out, has long since died, and when her buzz axe is plucked from the bed Jack makes contact again. His initial sobs transition into emotional sobs of relief, whereupon he explains that he was worried that the Vault Hunters might have killed the bandits, whom he hired to kill his grandmother, before they had the chance to finish the job. With the bandits dead, Jack no longer needs to pay them.

"Some other proposed titles for this mission: "Grandmother Knows Best," "Grandma Was a Rolling Stone," and "Turns out Jack Isn't Leading You into a Trap at All. He Just Has Deep-Seeded Grandma Issues.""

Turn In: Eridium Blight Bounty Board

Borderlands 2 Mechromancer Walkthrough - To Grandmother's House We Go - Side Mission 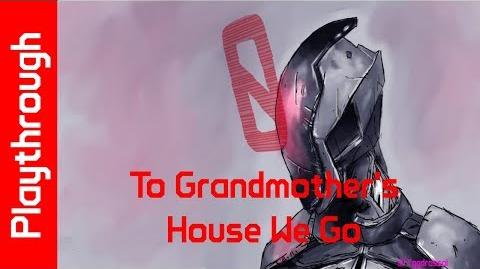 To Grandmother's House We Go
Retrieved from "https://borderlands.fandom.com/wiki/To_Grandmother%27s_House_We_Go?oldid=433255"
Community content is available under CC-BY-SA unless otherwise noted.