To Arms! is an optional mission in Borderlands: The Pre-Sequel. The mission is started via the easternmost Bounty Board in Triton Flats.

To Arms! is a lengthy collection mission in which common quality guns are collected and deposited in a mailbox for the People's Liberation Army. Once accepted, the first task is to go to a small scav base and start putting guns into a mailbox there. The room with the mailbox is on an upper floor and can be accessed by a jump pad nearby. The initial count of guns to be deposited is fifty, but for every ten guns the mission updates with a new directive.

After ten guns are deposited, Papa Crust ECHOs to say that they've been stolen and weapon crates must be returned to the collection. These crates are being carried by Missile Moon Buggies, which will drop them when destroyed. The missiles present a dangerous attack that can quickly destroy a Vault Hunter's moon buggy. While they can't strike a target at point-blank range, it is usually more effective to keep to long-range and batter the scav moon buggies down in a series of hit-and-run strikes.

When twenty guns have been deposited, another objective arises to check up on some PLA members. This leads to a confrontation with some scavs near the entrance to Crisis Scar. The number of scavs can make the fight a difficult one, but dropping back down to the ledge below their raised position can offer some emergency temporary cover. The jump pad to launch back across the lava lake can provide a handy escape route, although Vault Hunters trying this will be exposed to gunfire. Either way, diving deep into the enemy position can be a dangerous proposition, and edging towards them and making careful use of cover often has better results.

Thirty deposited guns leads to another objective where a three-way stand-off between rival PLA members Tim Pot, Tom Pot, and Tum Pot is taking place. All three are scaled roughly in level, and Tim Pot will have a slightly higher level than the other two. All three carry submachine guns. When one PLA member is chosen, he must be aided in the fight against the other two.

Forty deposited guns sparks an ambush where waves of scavs attack the growing arms cache. Holding out inside the room is a viable strategy, and nearby shugguraths can also be played off against the scavs.

After the fifty guns have been deposited, the only thing left to do is to go back to Concordia and witness the revolution.

"Victory is at hand!" 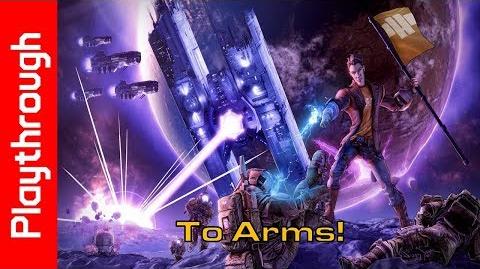 To Arms!
Retrieved from "https://borderlands.fandom.com/wiki/To_Arms!?oldid=471912"
Community content is available under CC-BY-SA unless otherwise noted.