The Season Pass for Tiny Tina's Wonderlands is downloadable content that is bundled together for a cheaper price than buying DLC individually.

This Season Pass costs $29.99 and it consists of dungeons, new armor, an exclusive chamber and more.

Take on outlandish new challenges with the Tiny Tina's Wonderlands Season Pass! Delve into four distinct dungeons and battle formidable bosses within. Discover all-new weapons and gear, wield the power of an additional seventh class included with the fourth dungeon, and rock the cosmetics of the Butt Stallion Pack!

On the outskirts of Brighthoof lies the eerie Dreamveil Overlook, where the enigmatic, affable fortune teller Vesper awaits an audience. Peer into her Mirrors of Mystery and you'll be whisked away to illusionary environments with fearsome new boss encounters, fighting for your life as Vesper regales you with fantastical fables.

Each time you successfully vanquish the boss' increasingly powerful forms, you'll earn Lost Souls that let you spin Vesper's Wheel of Fate, rewarding you with Legendary weapons and gear, as well as unique cosmetics. Completing a story also adds its contents to the pool of possibilities in the Chaos Chamber, the endlessly replayable endgame of Tiny Tina's Wonderlands! 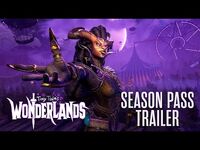