It is the final but repeatable tier of "Bar Room Blitz".

"Kill as many badass Bar Patrons as you can in the time given."

Kill all the badasses in two minutes thirty seconds.

While this mission pits players in a free-for-all fight against Bikers, Rats, Engineers and more, the mission only requires killing the six Badass Enforcers that appear; given the aggressive timer, it's wise to prioritize them to the point of ignoring other enemies.

Badass Enforcers are not among the initial crowd that populates Pyro Pete's Bar, and a handful of lesser foes must be dispatched for the first of the badasses to spawn.

In general, the badasses spawn from both doorways in the back room, and from either end of the upstairs landing. Rapidly looping this circuit, stopping only to kill Enforcers (or if necessary, other enemies that block the path), will allow this mission to be completed with a minute or more to spare.

Turn In: Pyro Pete's Battle Board 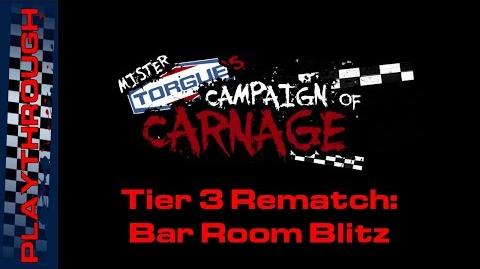