Survive the Appetite for Destruction event by defeating the Horde of Horrors. Tier 3 Difficulty.

Four waves must be completed in less than 4 minutes and 30 seconds. Each wave contains a variety of enemies, with each progressive wave increasing in difficulty.

The final wave includes Gladiator Goliaths armed with paired rocket launchers. The rockets are relatively slow and can be evaded by Vault Hunters moving at speed in the middle of the arena. Blasting their helmets off causes them to go berserk and rush to attack everyone in the arena at melee range, but has this also eliminates the threat posed by their rocket launchers.

"You've survived the Appetite for Destruction!"

Turn In: Arena Battle Board 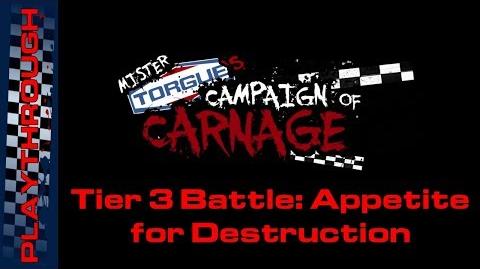