Tier 2 Battle: The Death Race is an optional mission in Mr. Torgue's Campaign of Carnage that becomes available on Crater Battle Board after previous mission in series of "The Death Race" is complete.

The mission is obtained from the Crater Battle Board and the first objective is to line up at the start line and wait for the signal to begin. There are three checkpoints around the course, in addition to the arch formed by the start/finish line, and the entire circuit must be completed twice within a time limit of 2 minutes.

The Runner is the vehicle of choice for this mission, as it is naturally the fastest available, and the intrinsic speed can be further enhanced by liberal use of the vehicle's afterburner boost.

There are several shortcuts around the course that can also shave off valuable seconds. These can be used readily, as only the checkpoints need to be completed in order - there is no requirement to actually remain on the rest of the track.

Bikes can be encountered along the way, and can prove to be a mission-blocking hazard if the Runner collides with them. Aiming the forward guns at them can be risky if they are close, and it is often preferable to steer clear of them or have a gunner remove them from a safe angle.

"You rock, but you ain't seen nothing yet!"

Turn In: Crater Battle Board 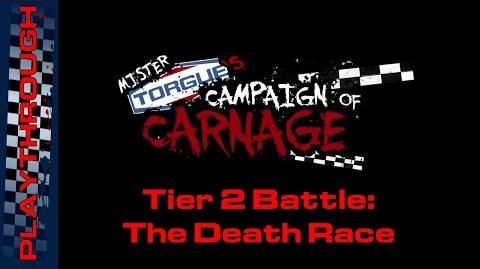