The Voyage of Captain Chef

The Voyage of Captain Chef is an optional mission in Borderlands: The Pre-Sequel given by Captain Chef. It becomes available after Let's Build a Robot Army is complete.

Assist Captain Chef in claiming Elpis for king and country.

This mission is completed by surviving waves of different enemies such as scavs, lil' scavs, raiders, and lunatics while defending the powered flagpole raising the flag and assisting Captain Chef in keeping his salute up as well at the same time.

As soon as the flagpole is activated, enemies will randomly spawn around the area mainly behind the two rock formations located at the south and west region near from the flagpole. There is an Air Dome Generator in the middle of the hold-out area, and rocks that can provide cover, but vehicles are also obtainable in this area if their firepower and mobility is desired.

Additional objectives to restart the stuck generator, and locate and place a broom, become active during the attack. These can be done at leisure after the scavs have been dealt with, or pauses in the fighting can be used to attend to Captain Chef's requests. Either way once both the flag-raising tasks and the kill objective is complete the mission can be turned in to Captain Chef. 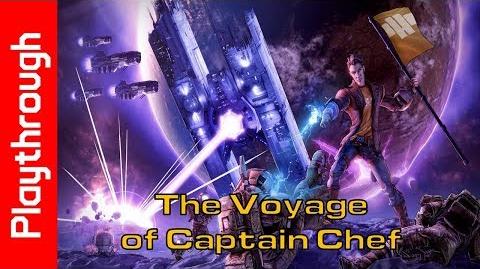 The Voyage of Captain Chef
Retrieved from "https://borderlands.fandom.com/wiki/The_Voyage_of_Captain_Chef?oldid=416710"
Community content is available under CC-BY-SA unless otherwise noted.