The Temple of Boom

The Temple of Boom is an optional mission in Borderlands: The Pre-Sequel 's DLC Claptastic Voyage.

This mission is picked up by finding a bizarre underwater Think Tank in Subconscious, containing two fish, one with Patricia Tannis's head, and one with Gladstone Katoa's head. Tannis represents Claptrap's sense of curiosity, and Gladstone represents his caution. The mission is picked up from Tannis, who instructs the Vault Hunters to seek out an "Eye of Seeing," which will lead the way to the Temple of Boom, which contains a long-lost artifact containing Claptrap's Original Design Document, which would help Tannis understand the ecosystem in Claptrap's mind. Gladstone urges the Vault Hunters not to take the quest.

Once the Eye of Seeing is found, elsewhere in Subconscious, and placed on the appropriate statue, a new area of the map is opened up, looking like an ancient dungeon or castle. The Vault Hunters meet The Sponx, who requires a riddle be answered before the Vault Hunters can pass. The riddle is answered correctly, so the Vault Hunters move forward, but the Sponx ends up attacking anyway.

Inside the main temple room, a gigantic stone statue of a Claptrap towers over everything -- Claptrap's original deity was himself. The Original Design Document rests on a platform on the statue's arms, and Gladstone once again urges that the Vault Hunters leave it alone. When the Vault Hunters try to pick it up anyway, the platform tilts down and the Vault Hunters are thrown into a pit, along with the code, which can then be picked up.

As they do so, PR0T0-TP appears, as an original version of what Claptrap's programming was like, and begins to monologue about the greatness of the Claptrap lineage, before the giant stone Claptrap's wheel falls off and crushes him. The wheel chases the Vault Hunters out of the area as well, while PR0T0-TP comically sticks to the same place on the wheel which crushed him, complaining all the while. The wheel will instantly kill any Vault Hunter it touches, so haste is recommended.

The Vault Hunters jump out of the temple onto a jump pad to safety, and then head back to the Think Tank to turn the mission in. Once there, the mission can be turned in to either Tannis, who will study the document and return Claptrap's memories of his former glory, or to Gladstone, who will destroy the document so that Claptrap isn't tormented by what he once was. Gladstone will reward the Vault Hunters with the Shield of Ages, and Tannis will give out Tannis' Laser of Enlightenment.

"You've braved savages and a series of death traps to recover an ancient artifact. Good times." 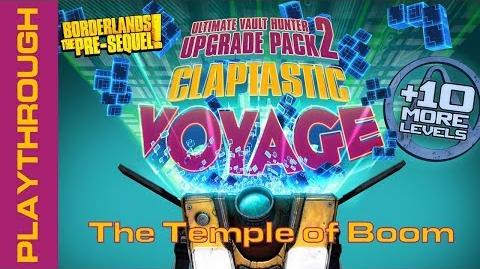 The Temple of Boom
Retrieved from "https://borderlands.fandom.com/wiki/The_Temple_of_Boom?oldid=439100"
Community content is available under CC-BY-SA unless otherwise noted.