The Sum of Some Fears

The Sum of Some Fears is an optional mission in Borderlands: The Pre-Sequel 's DLC Claptastic Voyage.

This fairly straightforward mission is picked up by finding a mysterious box near the end of the Subconscious level. The wheel attached to the box must be activated three times, and each activation will play a bit of Pop Goes the Weasel. On the last activation, Jack's head will pop out of the box, like a Jack-in-the-box toy. Jack's head is represented like it was during the Pre-Sequel ending cinematics, injured by the vault and before acquiring his mask. The mission can then be accepted.

Jack-in-the-Box expresses a desire to find out what Claptrap is most afraid of, and leads the Vault Hunter to a virtualized version of T.K. Baha, still mourning the loss of his wife, Marian, in his own upbeat way. Claptrap's Consciousness decides to intervene on his behalf and creates a virtualized version of Marian so they can be together. Jack-in-the-box gets annoyed that Claptrap's greatest fear is being alone and sends waves of Insecurity forces to attempt to engineer an unhappy ending, including many Badass variants.

After the Vault Hunter fights off the waves of Insecurity forces, though, T.K. Baha remains reunited with his wife.

"If you stare into the abyss, the abyss will stare back at you, even though it's totally rude to stare." 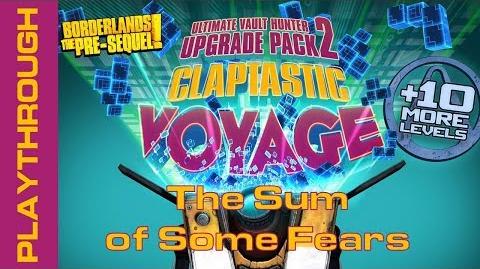 The Sum of Some Fears
Retrieved from "https://borderlands.fandom.com/wiki/The_Sum_of_Some_Fears?oldid=476148"
Community content is available under CC-BY-SA unless otherwise noted.