The Sponx is a stonelike creature in Claptastic Voyage DLC with a body of clapdog and a head-and-eye of a claptrap, on the top of which burns a flame.

The Sponx is first encountered in Subconscious location during the mission The Temple of Boom as a guardian of the eponymous Temple. The Sponx is initially friendly, requiring that the Vault Hunters correctly answer a riddle in order to proceed to the next area. Once the riddle is successfully answered and the Vault Hunters move forward. However, Sponx forgot to ask a second riddle and it only realizes that after the Vault Hunters have gone further into the temple. As it cannot allow those who failed to answer its riddles pass, Sponx turns hostile and must be defeated to proceed with the mission.

At the first meeting, Sponks sits on a pedestal at the entrance to the temple, and when it becomes an enemy character - jumps from above to the center of the room (after the traps). On subsequent visits to the temple, it will always wander around the hall.

Sponx is a heavily shielded and armored foe. It has the main attacks of the clapdogs (hitting the front legs and jumping) and two special ones: the flame on its head turns into a pillar of fire aimed at the character, and if it has moved far enough, Sponx releases from the eye clots of energy that first fly slowly, and then quickly rush to the enemy and cause shock damage (can produce an unlimited number, depending on how far the character is and how long).

This boss does not stand out for other special features, and killing it is not difficult for a well-equipped Vault Hunter: aim for its huge eye and constantly move around the battlefield so as not to fall under its attack, but be careful with the traps between the entrance and the hall. 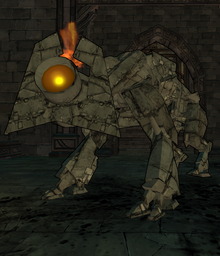 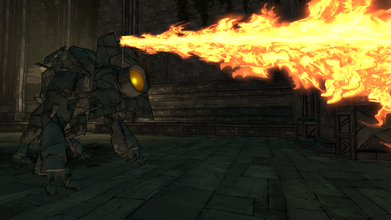