The Rustyards is a location in Captain Scarlett and Her Pirate's Booty. It is primarily created from the remains of old ruined and destroyed tanker and freighter ships. Many pirate bandits have set up settlements inside and outside the ships.

Coobie Gorge is an area in the central-east part of the map. It is a narrow path with a rockface on its eastern and a deep chasm on the western side. Two spiderant hives can be found in this area.

Dreg Scrapyard is cluttered with derelict cars, buses, and various other pieces of junk. The area has become home to a number of spiderants, and it also the hiding place for Captain Blade's Otto Idol.

Herbert's Hideout is a hut on a narrow rock ledge precariously perched over the abyss below. Herbert used to live here after Captain Scarlett fired him. Because of his extreme obsession with Scarlett, the hut became a shrine filled with images of or objects related to her. The only means of access is by an anchor-turned-elevator hanging from a nearby ship wreck.

Maroonie's Clipper is a derelict cargo ship located in the northern part of the map, and has since became a home of a large group of sand pirates. It is a maze of cabins, decks, stairs, and passages. At the stern (west side) there is one bandit turret in a position high above that offers a commanding field of fire over most of the areas below. Message in a bottle, as well as the Vault Symbol, can be found at northern edge of the stern.

Rusty Cog Settlement is the largest sand pirates base in the area. To the east there is a small village populated with sand pirates protecting the gate.

The area of Titleman's Point is relatively small and dominated by a boat dangling perilously over the Rustyards' deep chasm. There is little of note on the vessel, however a story mission objective for Crazy About You can be found just aft of the cabin and a squeezable Scarlett doll for the My Main Squeeze challenge is propped against the cabin on the foredeck. 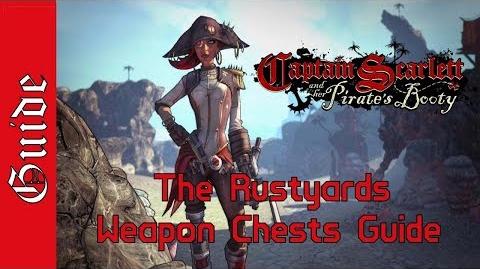 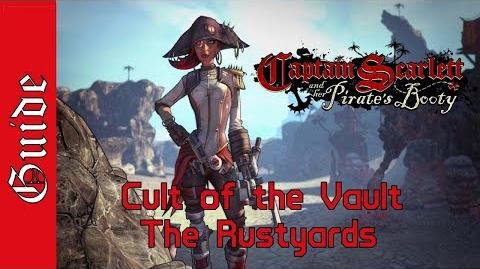 BL2 The Rustyards Cult of the Vault Guide
Retrieved from "https://borderlands.fandom.com/wiki/The_Rustyards?oldid=433099"
Community content is available under CC-BY-SA unless otherwise noted.