The Rust Commons West is a large expanse of barren wasteland spotted with bandit camps between New Haven and The Rust Commons East. It is home to all sorts of nasty spiderants and bandits.

This is the Arena for The Rust Commons West. It is located just north-east of the entrance from New Haven.

Located at a transition point for Rust Commons East. There is a New-U Station, Catch-A-Ride, Ammo Vendor and a Med Vendor here. There is a red weapon chest on the ledge above guarded by a small Rakk colony. A small enclosure can also be found near the Underpass containing a large amount of safes.

After crossing the bridge leading to the area where The Underpass is, there is a cabin on the right side of the bridge's end. When approaching the cavern, a Badass Brusier, Badass Psycho or Badass Raider will spawn from the cabin. Furthermore, there is a red weapon chest on a platform in front of the cabin.

There is also a Badass Rakk spawn south of One-Eyed Jack's encampment.

Located in the north-west corner next to the transition point for Dahl Headlands. There is a Catch-A-Ride here with an ammo vendor and a med vendor.

The Circle of Slaughter is the circular area in the southern portion of the map, directly to the west of the Aqueduct Encampment Catch-A-Ride station. There is an ammo vendor and med vendor here. The entrance is guarded by bandits.

Near the boundary lasers is a destroyed bandit camp which will trigger Rakkinishu's appearance during and after Hidden Journal: Rust Commons West. There are also some trash piles and Dahl containers which may be searched for items which often yields high-quality items. 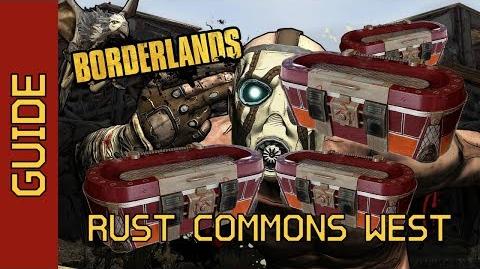 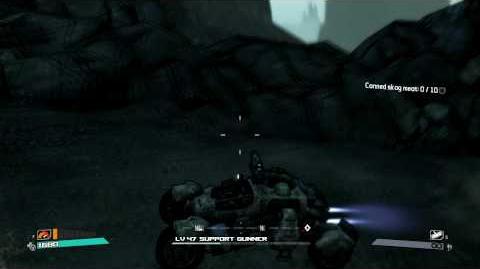 Borderlands How To Get to the Secret "Devs Chest" 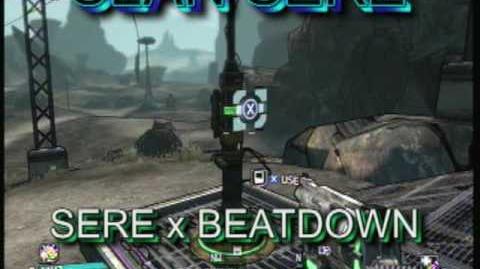 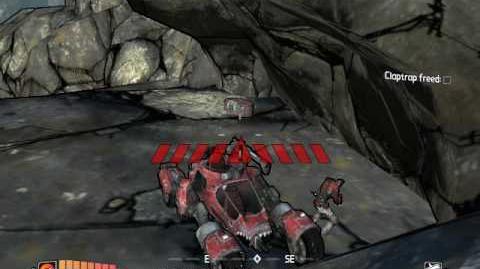 Borderlands Secret Chest (without death at all)
Retrieved from "https://borderlands.fandom.com/wiki/The_Rust_Commons_West?oldid=456162"
Community content is available under CC-BY-SA unless otherwise noted.