Rust Commons East is bordered on the west by Rust Commons West. Its southern border is a large body of water.

This is the entry way to Krom's Canyon. It appears to have been a lock for boat traffic, although there is very little water remaining here.

This area features in: Scavenger: Shotgun

The northern drawbridge. There is a small bandit encampment just before reaching the bridge.

Located along the western side of Rust Commons East, and south of the Underpass. This is one of the two satellite stations that were part of the Dahl Corporation's network which has been taken over by bandits since Dahl left the planet.

The Overlook is located in the eastern portions of the Rust Commons East and is only accessible after the drawbridges are lowered. It is located just north of Jaynistown and, as the name implies, overlooks a large portion of Rust Commons East. This is the location of one of the satellite stations.

Old Lynne Abbey is accessible once the drawbridges are lowered. It is located just south after crossing the northern drawbridge. It is currently being used by a bandit cult.

Outpost Scraple is a New-U outpost on the road near Old Lynne Abbey.

This is the area around the southern transition point to Rust Commons West and, aptly enough, the southernmost of the two large drawbridges. The only area of interest here is a Catch-A-Ride station. The South Drawbridge connects to Jaynistown. The Claptrap which operates the drawbridges is located at the southern drawbridge.

Located in the northernmost part of Rust Commons East.

This is the east end of the Underpass accessed from Rust Commons West. The only area of interest here is a Catch-A-Ride station. Just east of the transition point is a former store and bus stop, now a bandit camp. There is a weapon vendor there as well as a white chest on the roof. 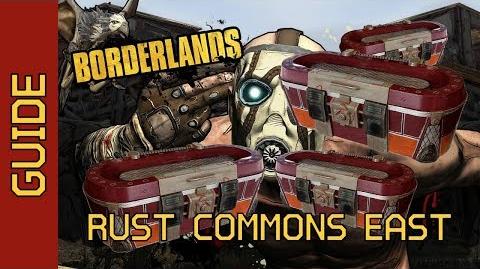