The Psychology of a Claptrap is a main storyline mission in Borderlands: The Pre-Sequel 's DLC Claptastic Voyage.

The mission starts off with the Vault Hunters heading towards Memory Bank 2, on their way to Cluster 99002 0V3RL00K, in search of the Quarantine Override Key which will release both the H-Source, which Handsome Jack covets, and 5H4D0W-TP. Claptrap is noticeably nervous about the Vault Hunters finding their way to the memory, and continually encourages them to give up as obstacles are met. Throughout the mission, Claptrap becomes increasingly desperate to stop the Vault Hunters from proceeding, and eventually resorts to outright pleading and begging.

Before his protestations get that emphatic, though, the Vault Hunters discover that the Data Streams to Memory Bank 4 are broken and must be fixed. The path to the control panel to reset the streams is blocked by a Deletion Field, and the Vault Hunters must lure some Reluctant Viruses near the wall. When close enough, the viruses are attracted by the energy and will feed on it, eventually bringing the wall down and allowing access to reset the Data Streams. Upon arriving in Memory Bank 4, the Vault Hunters encounter a new variety of enemy, Glitches.

Once the Vault Hunters arrive in Cluster 99002 0V3RL00K, they find that the citizens are all enthusiastic about Claptrap, with large banners saying things like "We love you, Claptrap!" A recorded song about the greatness of Claptrap plays over the town loudspeakers on repeat.

The Vault Hunters get to the center of town to discover that the Override Key is locked inside a frozen memory, and that Claptrap's memory must be defragged to free it. The Vault Hunters appear to the simulated town residents as if they were Claptrap himself, and 5H4D0W-TP says that the way to clear the memory is by reliving Claptrap's time in Overlook.

The first task is to destroy some of the pro-Claptrap propaganda to discover that underneath was actually paraphernalia related to a tournament to determine who the fourth Vault Hunter was going to be, being held at an arena perched on the cliffs. As this is done, Glitches start attacking from the disturbed memory sites. Once the propaganda is fixed, Cluter 99002 0V3RL00K painfully resets itself and the Vault Hunters find themselves back at the beginning of the level.

The next memory to reenact is when Claptrap set up fireworks for the Vault Hunter Tournament's halftime show. Software B4nD1Ts and Insecurity start attacking the Vault Hunters as they move through the level, as Claptrap's low-level functions try to prevent the Vault Hunters from revealing more. They ask Dave where to find the fireworks, and make their way to Gubbins Shack.

Once there, they encounter Denial Extension tentacles (part of a larger Denial Subroutine) which have been unwittingly created by Claptrap as even further attempts to prevent the Vault Hunters from digging deeper, and must dispatch those along with further Glitches. The fireworks themselves cannot be picked up, because in reality Claptrap had picked up the red boxes of explosives instead, because he "thought they'd have waaaay bigger explosions! And they did!"

The Vault Hunters place the explosives as Claptrap had done, and discover that Claptrap was responsible for completely destroying the arena, and killing or injuring the Vault Hunter candidates and most of the town residents. The memory reconfigures itself once more and the Vault Hunters find themselves back at the beginning of the area.

Heading into town again, the Vault Hunters meet Karima, who asks them to take a shipment of medicine up to the Holy Spirits church, where her husband Danny is waiting -- not all residents perished in the explosion, and the church has been set up as a triage center. The Vault Hunters do so, but discover that Claptrap inadvertently starts a fire in the church, which kills many more of the remaining residents. The memory reconfigures itself one final time.

The Vault Hunters then return to the site of the Quarantine Key and witness the final memory stored in the Memory Bank. One candidate for the Vault Hunter Tournament, Donk, had arrived late and so missed the carnage. Since Claptrap had spent time as a Vault Hunter previously, Donk and Claptrap face off for a battle, which is quickly over when Claptrap's "Rubber Ducky" VaultHunter.EXE mode activates and Donk is sent flying into the town Grinder.

The Override Key falls to the ground, ready to be picked up, but the Denial Subroutine picks it up first, and the Vault Hunters must give chase. They soon track the Denial Extension to a boss arena and must defeat it, and the various Glitch mobs that are spawned to fight alongside it. Once dispatched, the Quarantine Override Key can finally be picked up. The Vault Hunters leave through Overlook, where the townsfolk hurl verbal abuse at Claptrap for nearly completely destroying the town, while a sad song plays in the background.

Upon making it back to The Nexus, the Vault Hunters use the Override Key on the Quarantine cube, releasing both M4D-TP and 5H4D0W-TP. 5H4D0W-TP offers the H-Source to the Vault Hunters, who step forward to turn in the quest and retreive it.

"One of the keys to happiness is a bad memory. The other is the Override Key." 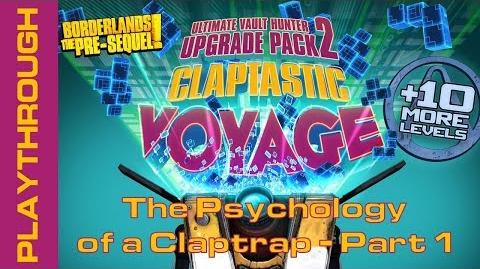 The Psychology of a Claptrap - Part 1 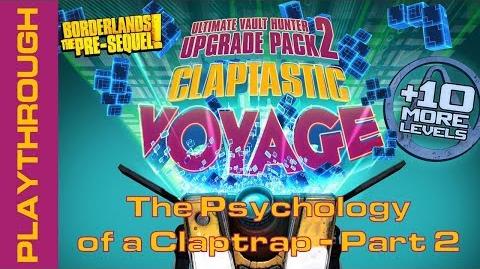 The Psychology of a Claptrap - Part 2
Retrieved from "https://borderlands.fandom.com/wiki/The_Psychology_of_a_Claptrap?oldid=431229"
Community content is available under CC-BY-SA unless otherwise noted.