The Once and Future Slab is a story mission in Borderlands 2 given by Roland. The mission is performed, starting at Sanctuary and continuing in Thousand Cuts locations.

"With the first obstacle to Control Core Angel accounted for, Roland has turned your attention to the second obstacle: a big-ass Hyperion defense bunker.
Roland feels you need the help of a local bandit leader, the Slab King, to destroy this bunker. The Slab King can be found in Thousand Cuts, but be careful though he hates Jack as much as anyone, his men won't exactly welcome you with open arms."

Upon reaching Thousand Cuts, the Vault Hunter is greeted by numerous bandits as well as buzzards. The buzzards provide a frequent source of harassment that causes a negative impact on shield recharge and are therefore a priority target. The section right before Brokeface Bridge often has a few badasses and goliaths. Goliaths are particularly useful if their helmets are shot off, allowing Vault Hunters to pass while they fight other enemies. Eliminating all opposition is not mandatory, as enemies outside cannot follow into the king's place.

Once inside the stronghold, the Slab King takes the Vault Hunter as new a recruit and sends in a welcoming party: a 4-5 wave bandit assault. The King will not intervene in the fight and is accompanied by 2 Badass Goliaths, which will join the fight either when their helmets are shot off or during the last wave. Common bandits will appear, which are all easily dispatched with incendiary weapons. Occasionally, a Goliath can spawn, which can be used to distract the bandits.

The Slab King reveals himself as Brick once the Vault Hunter has survived the initiation, and inducts them into his Slab gang.

After Brick agrees to help Roland, Handsome Jack launches a surprise mortar attack on the Slabs, along with loaders. To halt Jack's attack on Thousand Cuts, the Vault Hunter and Brick must destroy the mortar beacons guiding the mortars. Upon approaching each mortar beacon, red targets appear where a mortar will soon strike. Brick approaches each mortar beacon in turn and breaks the shield, leaving them vulnerable to gunfire. Each destroyed beacon will unleash progressively tougher waves of loaders. Brick, like Lilith in Hunting the Firehawk, is invincible and can do massive melee damage to every enemy, so Vault Hunters should mostly leave the fight to him.

"With the Slab bandit clan on your side, destroying the Hyperion bunker that defends Control Core Angel should be relatively easy. Emphasis on "should."

Main article: The Once and Future Slab/Transcript 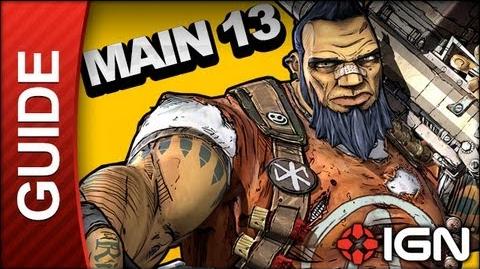 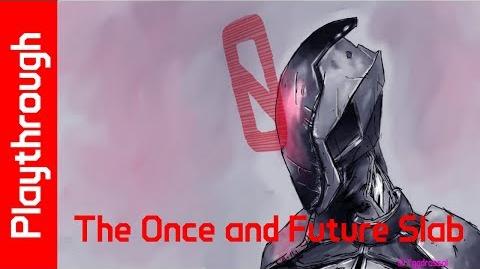 Retrieved from "https://borderlands.fandom.com/wiki/The_Once_and_Future_Slab?oldid=476630"
Community content is available under CC-BY-SA unless otherwise noted.