The Magic of Childhood

The Magic of Childhood is a side mission given by Murderlin in Murderlin's Temple.

After the mission is accepted, Murderlin explains that his son is BUTT UGLY and that some may wish to harm him. The entrance to the Nursery is right next to exit to Flamerock Refuge, and Murderlin's son is on a tower in the middle of this arena. When the son is spoken to, the tower rises and after a while orcs start besieging it from all directions.

The attackers consist of fire jumpers with incendiary barrels, zappers with lightning barrels and bushwhackers with explosive barrels. Their objective is to blow up the tower, while the Vault Hunters need to kill them before they can deliver their payloads. Due to the open geography of the Nursery, long distance sniping is suitable to destroy targets at the periphery of the arena. Close to the tower however, shotguns and multi-pellet SMGs make ideal weapons for hitting the barrels, which immediately kills the orcs carrying them. In general, the fighting is best conducted with precise armaments using fast projectiles, with either a spread shot or high fire rate to strike the barrels. The Chain Lightning grenade mod may also prove to be handy as it arcs between several orcs, either lowering their health or directly striking the barrel, without the need for very precise aim. 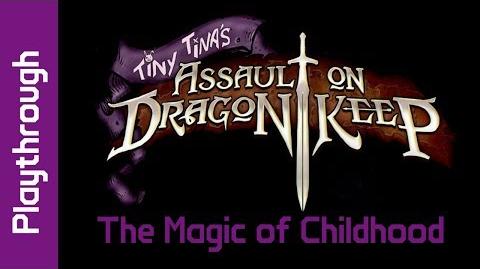 The Magic of Childhood
Retrieved from "https://borderlands.fandom.com/wiki/The_Magic_of_Childhood?oldid=470097"
Community content is available under CC-BY-SA unless otherwise noted.