View source
watch 01:31
Borderlands 2 The Lost Treasure sidemission
Do you like this video?
Play Sound

The Lost Treasure is an optional mission in Borderlands 2 given by an ECHO recording located in Sawtooth Cauldron. It becomes available after Toil and Trouble is complete.

"You found part of a treasure map. There is only one thing to do: start killing bandits until you find the other parts of the map, then assemble it and find the treasure. Admittedly, that was three things. But you get the idea."

After finding the ECHO recording, players are given the objective of finding the four pieces of the map. The map pieces have a chance to be dropped after killing various bandits. Upon picking up a map piece, Brick will make contact, giving some back story on Old Haven and the treasure.

Once the map has been assembled, Brick announces that the next objective is in the Caustic Caverns. The clues point towards four switches. Excluding the acid-soaked railway objective, all switches can be found through normal traversing of the Caustic Caverns:

Once four switches have been activated, ascension to the top of the facility is gained by way of an external service elevator between the Nether Hive and Rumbling Shore. The Varkid Ramparts above is an area predominantly populated with spiderants, plus the occasional varkid. An open area in the upper reaches of the Varkid Ramparts holds a hatch with a switch, and accessing this completes the mission.

'Under the acid-soaked railway'

Map location, 'Under the acid-soaked railway'

'In The Digger's Shadow'

Map location, 'In The Digger's Shadow'

'In the warehouse on the shore'

Map location, 'In the warehouse on the shore'

"You found the buried treasure! Go you."

Turn In: The Lost Treasure 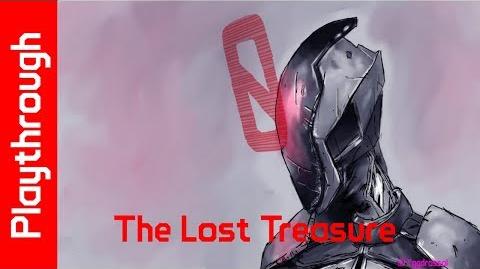