Optional mission
The Ice Man Cometh is an optional mission in Borderlands 2 that becomes available on the Happy Pig Bounty Board, if the player has activated it, while the mission Rising Action is in progress.

"The bandits out in Three Horns Divide have been harassing travelers for years. Thankfully, Claptrap has a plan: if you can shut down all of the bandits furnaces, Claptrap believes the bandits will get so cold that they'll have to run indoors just to avoid freezing to death."

Claptrap's plan is to be done with "blastamite" (the dynamite sticks next to the bounty board) rigged the furnaces in the bandit camp. Explosives are first collected at the Happy Pig Motel. These will be used to detonate some bandit furnaces at the Drydocks.

The Drydocks are in Three Horns - Divide near the northern exit to Three Horns - Valley. Inside the fort there is a furnace near the entrance, at ground level. Farther away there will be two furnaces on a platform on the left side. The final furnaces will be in the back elevated at the top of some scaffolding.

Once the explosives are placed, Claptrap instructs his minions to detonate the dynamite by using a detonator placed in the middle of the area. When the explosives are detonated, a wave of frozen psychos will emerge from buildings, protected from the cold by their snow hats, and rush to attack.

"Claptrap will be here all week, everybody!"

Turn in: Happy Pig Bounty Board 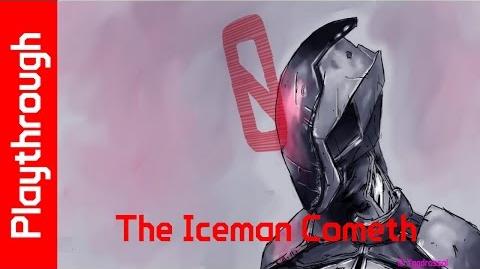 The Iceman Cometh
Retrieved from "https://borderlands.fandom.com/wiki/The_Ice_Man_Cometh?oldid=432387"
Community content is available under CC-BY-SA unless otherwise noted.