The Horrible Hunger of the Ravenous Wattle Gobbler

The Horrible Hunger of the Ravenous Wattle Gobbler

The Horrible Hunger of the Ravenous Wattle Gobbler is a Thanksgiving-themed DLC from Headhunter Packs for Borderlands 2. The content includes a small story and a boss fight with one set of unique head and skin to unlock.

The DLC can be accessed by Fast Traveling to Gluttony Gulch where the first mission will automatically start. The level of area is set when it is first visited, but in Normal Mode is at least 15 and at most 35.

The Vault Hunters travel to Mr. Torgue's "Hunger for Violence Extravaganza" in Gluttony Gulch after receiving a ticket from Mr. Torgue. They then witness Torgue "interviewing" the only person to have survived an encounter with the Wattle Gobbler. The unfortunate captive, who is tied up and gagged, is misheard by Torgue to have insulted Ellie's weight and is destroyed. Torgue then "whispers" that the Wattle Gobbler is invulnerable, but Torgue likes the Vault Hunters and wants to eat the Gobbler, so Torgue hatches a plan to poison the Gobbler.

The hunters fight through kitchens and fall-inspired areas in an effort to prepare, poison, and cook a skag-gravy meal for the Gobbler.

Hampered by "tributes" instructed by Torgue's board of executives to kill the Vault Hunters, the Vault Hunters fight and slay the weakened Wattle Gobbler after it exits a giant Horn of Plenty.

After the main mission is turned in, Torgue asks the Vault Hunters to speak to his grandma, who is a huge fan. Grandma Flexington tells stories in exchange for a single dollar and, if the second story is endured, offers a Torgue rocket launcher. 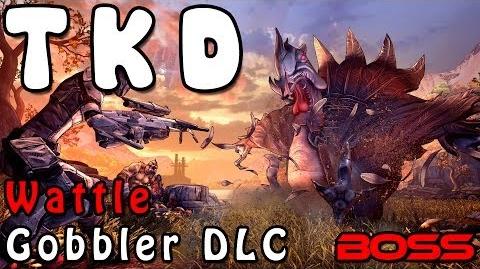