For an optional mission in Borderlands 3, see Holy Spirits.

The Holy Spirits is a small area in Borderlands 2. It is a pub located in The Highlands outside of the town of Overlook. It is run by Mick Zaford and is the base of operation for the Zaford clan.

There are three Vending machines in The Holy Spirits; a med vendor on the ground floor in a room adjacent to the toilet stalls, an ammo dump upstairs on the mezzanine floor, and a weapon vendor in a basement room. A slot machine in the bar room rounds out the interactive facilities.

Ale Wee Cavern is a cave system beneath The Holy Spirits. It is connected via a shaft below the floor of the ground floor storeroom and has a wide opening to the nearby cliff face overlooking a small mountain lake. A ledge outside this opening holds a red weapons chest. The Zafords use the cavern as a vault with ten ammo crates filled with money.

Vault Symbol in the bathroom of The Holy Spirits 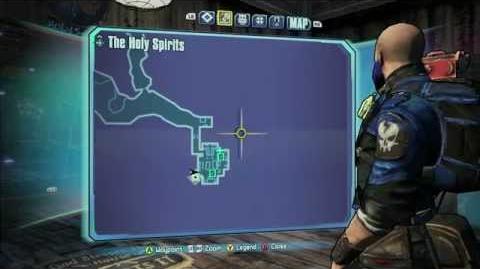 Borderlands 2 The Holy Spirits Cult Of The Vault Symbol Challenge Location
Add a photo to this gallery
Retrieved from "https://borderlands.fandom.com/wiki/The_Holy_Spirits?oldid=473671"
Community content is available under CC-BY-SA unless otherwise noted.