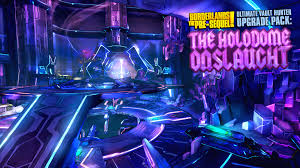 Ultimate Vault Hunter Upgrade Pack: The Holodome Onslaught is a downloadable content pack for Borderlands: The Pre-Sequel. It adds a new slaughterdome arena featuring five rounds and a final, repeatable badass round, and raises the level cap by 10.


The Holodome Onslaught is included within the Season Pass, is also available for individual purchase at $9.99 USD for PC, Xbox 360 and PS3, and is included free of charge with Borderlands: The Handsome Collection on PS4 and Xbox One.

The Holodome Onslaught begins with Axton and Gaige announcing their return to Pandora from Vault Hunting on Epitah. When they learn that Athena is telling her story, they decide to listen in alongside Tiny Tina but want to hear the tale in the fastest way possible by skipping everything but the violence. While Athena tells the shortened story, each round offers optional bonus objectives based on the events in her tale.

In addition to numerous Lost Legion and Guardian enemies returning from the campaign of Borderlands: The Pre-Sequel, The Holodome Onslaught features a small selection of new enemies:

Retrieved from "https://borderlands.fandom.com/wiki/The_Holodome_Onslaught?oldid=433014"
Community content is available under CC-BY-SA unless otherwise noted.