The Highlands is an area in Borderlands 2 for the first time becomes accessible during the story mission Bright Lights, Flying City. The town of Overlook is located here.

This Hyperion outpost is at the middle of the area. It stands on a cliff above Overlook, and is filled with Hyperion robots and personnel.

The Double Rainbow Easter Egg can be accessed by going past the Constructor and jumping down onto a cliff with a tent before the second pair of Badass Loaders. Either Handsome Jack or Claptrap will make contact, repeating lines from the viral video. Viewing the double rainbow unlocks the "What does it mean?" achievement/trophy.

It is bridge, thrown through the Whispering Riverbed canyon. Named after Jeffrey Blake. The bridge has an auxiliary bottom platform, on which one can find one of the Tannis's ECHOs and a red chest.

Frothing Creek Mill is an old rundown abandoned mill that has been overrun by stalkers.

Hyperion Bridge is a very long bridge leading to the Hyperion capital city in Pandora, Opportunity.

A large hollow rife with stalker nests and droppings near Overlook. Henry the Stalker resides here, and this was (presumably) the place of death of Taggart.

The fuse box on top of this tower can be shot from a Winds of the Highlands flag nearby.

Lake Shining Horizons is the huge lake on which Opportunity is built. The road leading out to the city elevates into a causeway on large concrete pylons and beneath it lies a beach infested with threshers.

The electrical field is controlled by a fuse box on top of the Isotope Reclamation Tower.

Old Cranky's Pond is a pond with a narrow jetty running out to an abandoned fishing hut. A windsock for Winds of the Highlands is located next to a shack here, and one of Tannis's ECHOs lies out past the hut.

This is a town at the top of a hill with The Holy Spirits bar at the base of the hill. The town has a medications vendor, ammo vendor, and gun vendor. It also has a fast travel station and a Catch-a-ride station.

Whispering Riverbed is the site of a dried out river located under Blake Bridge and is now populated by threshers. 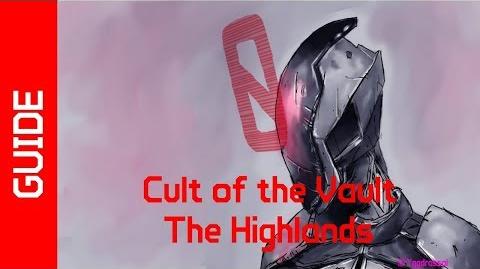 BL2 The Highlands Cult of the Vault Guide 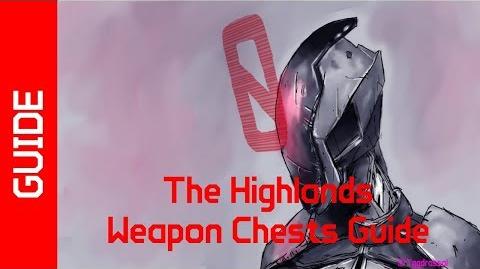