The Good, the Bad, and the Mordecai

The Good, the Bad, and the Mordecai is an optional mission in Borderlands 2 that becomes available on Sanctuary Bounty Board after A Train to Catch is complete.

"Years ago, Mordecai won the grand prize at Moxxi's Underdome. A little while after that, a thief named Carson stole the loot chest and hid it somewhere in The Dust. Mordecai has informed you that, if you are able to find Carson and figure out where the guns are buried, you can keep them."

The first objective in this mission is in the Goose's Roost area of The Dust. Southwest of Ellie's Garage, there is a large rock formation that can be used as a ramp to access this area.

The next objective is in Friendship Gulag. Being a Hyperion facility, this area contains many loaders and combat engineers. Carson's body is in a cell where another ECHO indicates a jail break situation, but rather than springing Carson, the person who broke out killed him instead.

The next objective is on Boot Hill, an old church site with a small cemetery on one side. Mordecai's treasure is in one of the unmarked graves. Mobley emerges from the church after the chest is uncovered, and Gettle, a Hyperion treasure hunter, will also arrive. Both of them want the treasure chest, which leads to a three-way Truxican standoff. Both must be killed to complete the mission. The easiest way to do so is to simply retreat down the hill and let one of them (usually Gettle by virtue of the shield) kill the other, then to finish off the remaining weakened goon.

"Of the three treasure hunters searching for Mordecai's lost chest, you emerged victorious. Good on ya." 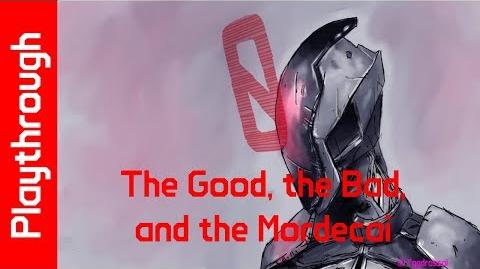 The Good, the Bad, and the Mordecai

Retrieved from "https://borderlands.fandom.com/wiki/The_Good,_the_Bad,_and_the_Mordecai?oldid=486450"
Community content is available under CC-BY-SA unless otherwise noted.