The Final Piece is a story mission in Borderlands given by Patricia Tannis.

"The little Claptrap doorman is freed, so you should now be able to enter the Salt Flats. Talk to the Claptrap once he's at the gate. It is time to go after Baron Flynt, who punched my dog and stole a piece of the Vault Key. Did I mention he lives on a giant digging machine in the Salt Flats? He calls himself the leader of all the bandits. You'd like him, I think." 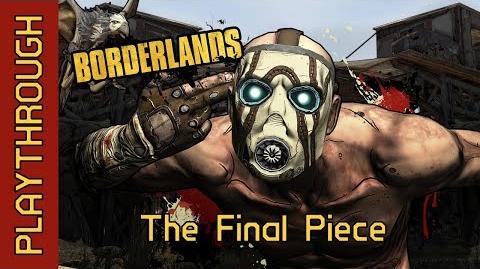 Take back the final piece of the Vault Key from Baron Flynt.

Before proceeding to the final fight on top of Baron Flynt's stronghold, it might pay to check on ammunition stocks and replenish as needed. There is a Med Vendor and an Ammo Vendor on the eastern side of Thor for this purpose. When the preparations are complete the upper decks can then be accessed by riding an elevator up from directly beneath the excavator. The entrance to the elevator is on the western side.

The Baron sits on his throne on an elevated platform, and shouldn't be engaged immediately. When a character steps away from the elevator, several building doors open, and Mutant Midget Psychos and psychos come pouring out. After the first wave is dispatched, a second wave, which includes a Badass psycho, will attack. A third wave consisting of the two bodyguards of the Baron, Hanz and Franz, will then rise out of the deck on a wide platform. Franz is a tougher-than-usual badass bruiser who moves slowly while firing a machine gun, while Hanz will rush forward to melee with his giant sword as well as lob Proximity Mine grenades. Hanz is relatively quick, and will rapidly close range with his targets. An effective approach is to lure Hanz away from Franz, and attack while using spaces around the rear of the elevator for cover. Hanz will fall quickly to critical damage and then the gunner can be attacked more easily. It is also possible to back into several places that Hanz does not follow. Franz does not move much, so it is possible to stand next to him and critical hit him to prevent him from returning fire. Both are very durable, but can be whittled down quickly with headshots; Franz has an average shield as well as about 4 times the health of a regular bruiser, while Hanz is unshielded and has about 2/3rds as much health as Franz.

If the two bodyguards prove to be difficult there is a shed around to the right of the elevator with communications dishes on top that can be exploited. Access is gained by jumping on a fuel tank and then the dishes can be used for cover. This location will provide various useful firing angles while simultaneously offering good cover from attacks.

Baron Flynt himself, along with a handful of regular bandits, present the last fight on top of Thor. They will filter down to the deck from the raised rear of the structure, some making the descent and others firing from above. The Baron uses a Shotgun that fires a sustained burst of six rockets at a medium speed but with low accuracy. After he fires, there will be a five to six second break where he reloads or just idles, allowing attackers a short window of opportunity to open fire on him. Each rocket is damaging enough that being exposed to an entire salvo is something to be avoided, so keeping to cover and making use of the reloading pauses can be a valuable tactic in bringing down Flynt. Flynt has a decent shield and has a similarly high amount of health as Franz, so scoring critical hits is very helpful.

The mission is turned in at the large chest behind Flynt's throne.

"Tannis lied. Baron Flynt did not have a piece of the Vault Key."