The Empty Billabong is an optional mission in Borderlands: The Pre-Sequel given by Peepot. It becomes available after Systems Jammed is complete.

Peepot's friend, The Jolly Swagman, has gone missing and the Vault Hunters are requested to find him.

The Jolly Swagman corpse is found under a coolibah tree at the far northwest corner of the island where Peepot's camp is located. An ECHO Recorder is found following Peepot's request to search Swagman's pockets. Listening to the recording on the device reveals that Peepot thinks his friend is crazy and that he does not believe him. Regardless, he requests Swagman's tuckerbag to be found and brought back to him. Tuckerbag is found on a bank across the lava river where number of Kraggons will spawn and make the retrieval somewhat challenging. Once brought back to him, Peepot finds a baby Kraggon, a Jumbuck, in the bag. 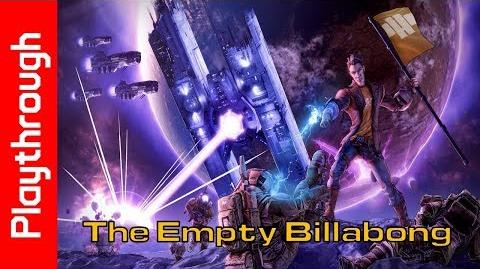 The Empty Billabong
Retrieved from "https://borderlands.fandom.com/wiki/The_Empty_Billabong?oldid=474437"
Community content is available under CC-BY-SA unless otherwise noted.