The Don is an optional mission in Borderlands: The Pre-Sequel given by The Don character. It becomes available after Eye to Eye is complete.

"You can't play the game without the right equipment..."

This timed mission is available from The Don in Vorago Solitude. The Vault Hunters are tasked with retrieving a snick-it ball that the Don has struck and return it within four and a half minutes.

After The Don finishes his initial speech, a circular waypoint area will show the general vicinity of the ball. This area is determined randomly at the start of the mission, but it will always be within the two chasms running from north to south. It has also been known to appear within the Lost Legion base at the south of the map.

It is recommended to make ample use of the jump pads strewn about the area to complete this mission faster.

The ball is within the circular waypoint area and appears as a small red orb. The Vault Hunters must then pick up the ball and return it to The Don before time runs out.

If the mission is failed, it can be restarted from the Don again.

"What a ridiculous sport." 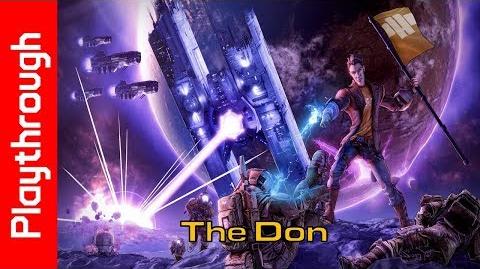 The Don
Retrieved from "https://borderlands.fandom.com/wiki/The_Don_(mission)?oldid=418483"
Community content is available under CC-BY-SA unless otherwise noted.