The Dahl Headlands is a large expanse of barren wasteland between New Haven and the Arid Badlands. It is home to all sorts of nasty scythids and bandit, and many of the latter choose to drive outrunners equipped with either machine gun or rocket turrets. The bandit boss Mad Mel resides in the south-eastern corner of the map in a circular arena. One of the missions in the main storyline requires players to kill Mel.

Just off the main road on the eastern side of the Dahl Headlands, the Dahl Headland Electrical Station operates to serve the unique energy requirements of the Fast Travel network. When first encountered, the station will be in a shut down state, however after the Powering the Fast Travel Network mission has been completed, its equipment will generate a bright purple energy beam that lances into the sky. The energy beam terminates in a swirling vortex and is visible throughout the area. Just outside of the facility is one of the numerous Catch-A-Ride terminals, along with a Hyperion New-U pole. Bandits have control of this facility and they will attack anyone who trespass in their territory.

Located along the road, Lucky Zaford runs this small inn. There are some weapon chests that hold valuable items, and all three types of vending machine. There is also a Catch-A-Ride station, along with Lucky's Bounty Board and a Hyperion New-U station.

A small racetrack infested by various types of scythids that burrow underground until disturbed.

Here is a map of The Dahl Headlands area, with prominent items marked.

There are several red chests and some silver ones. The crate by the guardians may contain Eridian weapons, like the Thunder Storm. 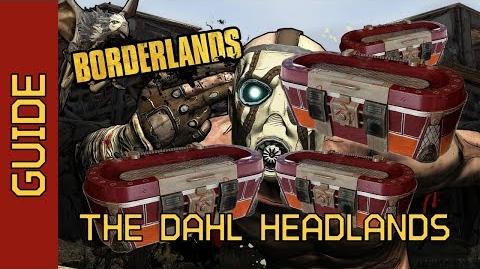