The Cortex (exit only)

The Cortex is a region in the Claptastic Voyage DLC from Borderlands: The Pre-Sequel. It is an arena area, serving initially as the Vault Hunters' first direct confrontation with 5H4D0W-TP, and later as the site of the recurring arena mission l33t h4x0rz.

This is the location the Vault Hunters first arrive in from Subconscious. A one-way Fast Travel station is located here, as well as a set of vending machines.

This is the main arena where the Vault Hunters first face off against 5H4D0W-TP during the story mission END OF LINE. After fighting off waves of enemies, 5HAD0W-TP itself attacks the Vault Hunters, assisted by Hope and Self Esteem.

After the main storyline in Claptastic Voyage is completed, Vault Hunters can return to The Cortex and use it as a recurring and configurable arena by accepting the mission h4x0rz in Deck 13 1/2, and then re-playing the mission l33t h4x0rz to spawn the arena as many times as desired.

The control center area is available once the battle with 5H4D0W-TP is completed, which will offer an exit to Deck 13.5. 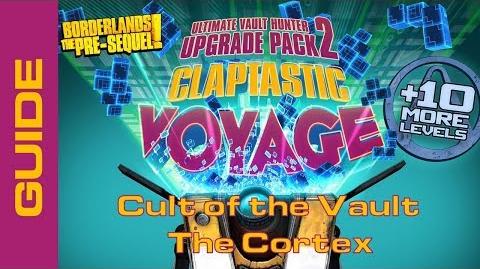 The Cortex CoV Guide
Retrieved from "https://borderlands.fandom.com/wiki/The_Cortex?oldid=416278"
Community content is available under CC-BY-SA unless otherwise noted.