For the sniper rifle in Borderlands 3, see Cold Shoulder.

The Cold Shoulder is an optional mission in Borderlands 2. It is acquired by talking to Scooter after Bright Lights, Flying City has been completed.

“Scooter’s girlfriend, Laney, has been brainwashed into becoming a tunnel rat. Scooter has asked you to bring Laney’s favorite flowers and food to her in The Fridge, in the hopes of turning her back into a non-cannibalistic human being.”

The mission takes the Vault Hunters to The Fridge where an optional objective to find three girly magazines takes place on the car-choked road. Rats of various types, and a few rakk, patrol the area where the magazines are hidden.

The next area waypoint is in Icemaw Grotto, marking an objective to find five flowers. Following the flowers, the next waypoint marks five pizza slices scattered around the wreckage of a Moxxi's Pizza delivery van. One of the slices is sitting atop a piece of rubble that can only be reached by dropping down from the broken highway above. The grotto is also home to a number of crystalisks that will provide a constant threat if not despatched before the flowers and pizza are collected.

When the pizza is collected, the pizza and flowers are to be placed in designated points near a huge door. This provides an enticement for Scooter's love interest, Laney White. At this point, she will come outside and attack, along with seven midget Rats. Laney moves fast and erratically, leaping around and keeping low to the ground while she fights. 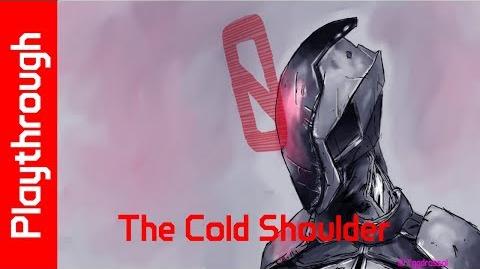 The Cold Shoulder
Retrieved from "https://borderlands.fandom.com/wiki/The_Cold_Shoulder?oldid=466576"
Community content is available under CC-BY-SA unless otherwise noted.