The Claptrap's Apprentice is an optional mission in Tiny Tina's Assault on Dragon Keep. With a freshly charged wand in hand, Claptrap sets forth to put on a spectacular display of magic.

Having acquired a beard and a fully charged wand, Claptrap is now ready to demonstrate his prowess with magic. He leads the way to a natural stage upon which he proceeds to show off his new found power. His first spell goes awry however, and he summons a Broomstick. Wishing to dismiss his new creation, Claptrap then accidentally creates a second one, and then in a fit of frustration attempts to dismiss both, only to summon two more.

Vault Hunters are then directed to dispatch the brooms, although destroying them does little more than pause the battle as more appear and replace them. Claptrap's solution is then to de-power the Broomsticks, but his spell has the opposite effect, first transforming them into fiery versions, and then enlarging them to giant proportions. He also inadvertently weakens the Vault Hunters themselves, causing a drastic reduction in movement speed to the characters.

The various iterations of the Broomsticks are resistant to incendiary attacks, while most other damage types can be employed very effectively against them. Their thin profiles make them difficult to target with some conventional guns, but explosives directed at their buckets and bristles catches them in a damage radius that destroys them quickly. 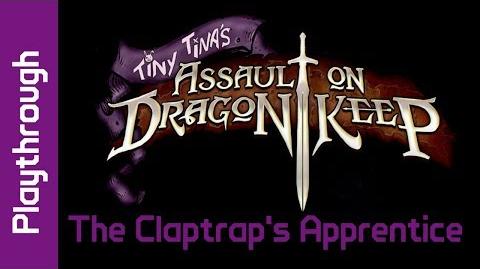 The Claptrap's Apprentice
Retrieved from "https://borderlands.fandom.com/wiki/The_Claptrap%27s_Apprentice?oldid=433438"
Community content is available under CC-BY-SA unless otherwise noted.