The mission begins with Zombie T.K. Baha instructing players to defeat the Pumpkin Kingpin, who is harassing the inhabitants of Hallowed Hollow. Upon making their way to the gate leading to his lair however, the gate slams shut and a magical lock prevents the Vault Hunters from passing. T.K. Baha then asks them to round up three pieces of the skeleton key, which can be used to unlock the gate. The pieces can be collected by finding and killing three enchanted skeletons hidden in graves throughout Necropolis, the Church of the Dead, and Lavashore Village. Enchanted skeletons have slightly more health than normal reanimated marauders and attack with multiple magical spells, most of which deal only minor damage.

Once the three enchanted skeleton bones have been collected, T.K. Baha tells of a friendly blacksmith who will forge the key. West through Lavashore Village and The Colony is a long valley swarming with spiderants, followed by the Infested Forge. It is here that Sully the Blacksmith makes his appearance, but as an enemy rather than an ally, and has high health, fire resistance, and a very powerful hammer throw attack. Once the hammer is collected from Sully's body, the enchanted bones must be placed on the anvil, where the hammer is then used to forge the key.

With the key assembled, the next phase is to return to Necropolis to unlock the gate and face the Pumpkin Kingpin. Upon exiting the Infested Forge there will be a red chest to the right of the door. After Vault Hunters reach the Pumpkin Kingpin's lair, T.K. Baha remembers that the Pumpkin Kingpin is slumbering underground, and will need to be lured out by flooding the Pumpkin Patch with blood. However, the windmill that runs the pipeline is not working, and Vault Hunters must shoot six skrakk nests to unblock the blades, all the while being assaulted by swarms of skrakk. A valve is then activated to release the blood and flood the Pumpkin Patch.

With the Pumpkin Patch awash with blood, Pumpkin Kingpin claws his way out of the ground. He has several different attack methods: 1. Short range melee attack which can be avoided by keeping distance or dodged by running backwards quickly. 2. Sometimes he sprints a short distance to run into the Vault Hunters. 3. He throws pumpkins which stuns the Vault Hunters on impact or explods after being on the ground for a while.  4. He also has a power attack which he need to charges before attacking. While he's charging the power attack there is a large circle on the ground which shows the influenced field. 5. An energy beam or a flame beam. 6. Homing fire balls. Besides that, he can also summon minions from time to time. The minions can attack the Vault Hunters as well as heal Pumpkin Kingpin after they climb on his shoulders. If there are several minions on his shoulders Pumpkin Kingpin could be healed very fast so it'd be better to deal with the minions on his shoulder first. When he's defeated, Pumpkin Kingpin's head pops up and begins to bombard Vault Hunters with powerful blasts of fire while flying around rather slowly. His head is much weaker than his body and can be killed easily. Upon his defeat, the Pumpkin Kingpin will drop a custom head for a random character along with average loot and an unusually high number of vehicle skins.

"You can consider that pumpkin smashed." 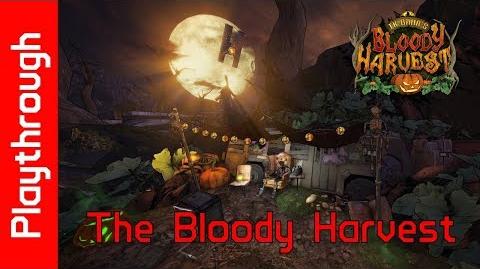 The Bloody Harvest
Retrieved from "https://borderlands.fandom.com/wiki/The_Bloody_Harvest?oldid=472513"
Community content is available under CC-BY-SA unless otherwise noted.