The Bestest Story Ever Told

The Bestest Story Ever Told is an optional mission available from the Bounty Board in Concordia. The Vault Hunter is tasked with defeating The Invincible Empyrean Sentinel in Eleseer. 20 Moonstone is required to fight this raid boss.

“There's a raid boss that need defeating, and it's lurking somewhere in Eleseer. Locate the entrance and prepare yourself. Post-script: you MAY want to bring a friend. Or, you know, three.”

The Invincible Sentinel and The Invincible Empyrean Sentinel are very much the same to their original counterparts, with a few minor differences. Noticeably, their health and shields are much higher, and some of their attacks have longer range (specifically some of the Sentinel's air attacks). Their damage remains the same, and is not scaled up from the original fight, but the supporting Guardians are slightly tougher and deal a bit more damage.

It is highly recommended to fight the Raid Bosses the same way as their counterparts during The Beginning of the End story mission, but with extra caution and patience, as the fight will linger on compared to the original. There will also be a smaller pause between the transition from Sentinel to Empyrean Sentinel, and the Sentinel will not drop loot upon being defeated.

One strategy is to use Transfusion Grenades during the fight against the Empyrean Sentinel, as the Child Grenades do not have to damage the boss's face to spawn health orbs; as long as they hit the boss anywhere, health orbs will be created.

It is also recommended for the Vault Hunter(s) either to have a versatile set of weapons, or some means of ammo regeneration, as the lengthy fight can leave the unprepared struggling at crucial moments. 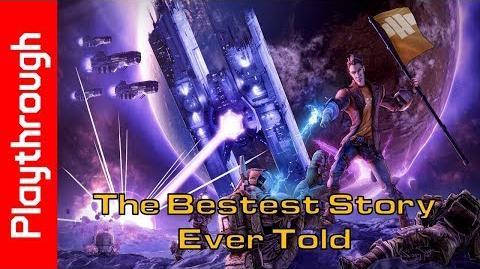 The Bestest Story Ever Told
Retrieved from "https://borderlands.fandom.com/wiki/The_Bestest_Story_Ever_Told?oldid=416742"
Community content is available under CC-BY-SA unless otherwise noted.