For the Borderlands 2 challenge taking place in the Arid Nexus, see Beginning of the End.

The Beginning of the End is the twelfth and final story mission in Borderlands: The Pre-Sequel.

Vorago Solitude marks the first appearance of the Lost Legion Eternals - Lost Legion marines that have taken on, or have been possessed by, otherworldly Eridian powers - as well as Guardians, Eridian-made machines that try to protect the Vault from Jack and his Vault Hunters. Between the Eternals, the more conventional Lost Legion, and the Guardians, most targets are shielded and all are fleshy, giving rise to a tactic of alternately using shock and incendiary damage against them for optimal damage output. Cryo weapons can also be used as an auxiliary method to immobilize the otherwise dangerous eternals.

At the end of the main Legion encampment is the Outfall Pumping Station and its resident guardian the Raum-Kampfjet Mark V. The aircraft will pass over the crater repeatedly while attacking with lasers and turret fire. It will also intermittently fire a laser barrage or drop nukes, which are slow but lethal. These special attacks are announced by its pilot in a broadcast message. As a huge, slow target, the aircraft isn't too much of a threat on its own, but the Vault Hunters must also evade continuously spawning Guardians and Lost Legion. As RK5's flight pattern has it keeping its distance, long-range weapons are required for the fight.

A complication for the fight is the lack of Oxygen in the area, which can be sparingly resupplied by dropped O2 canisters, or by several Air Dome Generators in the area. The cover is minimal, requiring Vault Hunters to either keep moving and try to stay at long range from enemies.

A solution that overcomes the arena's difficulties both with an attack from multiple angles and with limited oxygen is to stay in the room at the bottom of the elevator, which protects the Vault Hunters from most angles and ride the elevator back up repeatedly as soon as oxygen runs low. However, Guardians and Dahl troops will still be able to attack the Vault Hunter from there and dealing substantial amounts of damage to RK5 requires leaving the room.

This underground Eridian installation is mostly a navigation and platforming challenge, interspersed with fights with Guardians and Lost Legion. Before entering the last map, the Vault Hunters must use a Legion cannon to shoot open a shield put up by the Legion to defend the Vault. Caution is recommended when using the cannon against enemies as the Vault Hunter will be injured if a shell detonates too close to the cannon.

This large Eridian structure, floating within an orrery in a starry void, is the approach to the Vault proper. The Vault Hunters will encounter several varieties of Guardians as well as Ophas, large creatures that spawn and are healed by Putti, small but fragile flying beings. An extra-large version, the Opha Superior, appears mid-way through the map as a miniboss, but requires no special tactics to defeat. Most of these targets are vulnerable to shock damage, are armored, and can be easily taken out by defeating the Putti.

There are no vending machines immediately prior to the boss fight, so Vault Hunters may want to return to the entrance to resupply before stepping into the rift that leads to the Vault. This pre-battle consideration is mitigated somewhat by frequent ammunition drops within the final boss encounter itself.

The Vault of the Sentinel

The arena for the final fight is a large, flat circle, and is a low gravity environment complete with a breathable atmosphere. This combination becomes advantageous if used tactically as Oz kits will remain charged and continue to offer boosted jump capability as needed. Ammunition and health periodically surface from apertures in the floor, and the grenades acquired in this manner offer valuable sources of healing if a transfusion grenade mod is equipped.

There is a four-stage and another three-stage battle that take place in this area, and each one consists of a final boss with several Guardians. These enemies have shields to contend with, so at least one shock weapon equipped on each participating character is likely to provide a useful benefit. Note that aside from the three-stage battle, no enemy is resistant to shock damage.

The first boss is The Sentinel, a large and highly mobile humanoid with four faces spaced around its head. It is a shielded target that stalks around the area unleashing attacks of a particular element, to which it is also resistant to. The Sentinel can use a melee attack in all phases that prevents it from moving but reflects attacks from all weapons except for melee attacks and Beam lasers. After the shield has been depleted three times, the Sentinel loses its shield. The elements in the cycle are slag, incendiary, and cryo, before reverting to slag. Each time its shield is depleted, and it starts taking damage, marks a point where the fight undergoes a radical change. At this point, the Sentinel shifts to a new element and regains full shield capacity. It becomes temporarily invulnerable and releases a huge nova attack that will pass through obstacles and may cripple Vault Hunters instantly. The incendiary phase may involve it launching homing fireballs, the cryo phase with ice lasers, and the second slag phase with homing slag daggers. After all four phases of the fight have been completed, the Sentinel can finally be defeated, offering a substantial loot drop in the area and a chance to heal up. Note that the Sentinel is immune to the Longnail's shield bypassing effect, and is considered a flesh target when it has no shield.

After a short break, The Sentinel re-appears as The Empyrean Sentinel. This enemy is a giant of monolithic proportions, again bearing four faces spaced around its head. The Empyrean Sentinel is vulnerable to attack only in its glowing face, and as with the Sentinel before it, will shift through elemental phases of slag, shock, and corrosion. The face is counted as a shielded target and shock weapons can be used during the slag and corrosion phases. The Empyrean Sentinel's attacks are far less direct than those of the Sentinel, and aside from pounding the floor in blasts that send Vault Hunters hurtling high into the air, it also creates wide areas awash in elemental damage mid-air soon after. In all phases, the boss can also generate a singularity of the respective element that will violently explode and deal elemental damage after some time or if the boss' shield/health bar depletes. To some extent, these area effects can be avoided by leaping clear in the low gravity environment, but otherwise, they provide a constant damage source that may prevent shields from being restored and continue to reduce health. The Empyrean sentinel may occasionally pressure the ground with his hands, causing them to be imbued with the same element of its current phase and causing constant damage while stone platforms rise up into the air, which one may use to take advantage of. Forcing the Empyrean Sentinel to shift phases, destroying the mask and defeating the Empyrean Sentinel will earn a second wind.

Get inside the Vault... and get revenge. Be careful what you wish for.

Main article: The Beginning of the End/Transcript 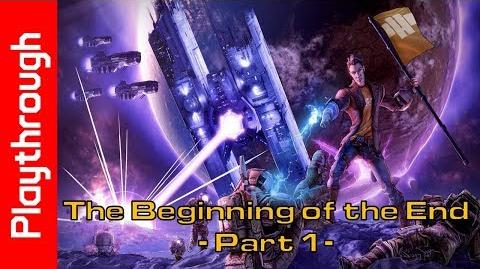 The Beginning of the End - Part 1 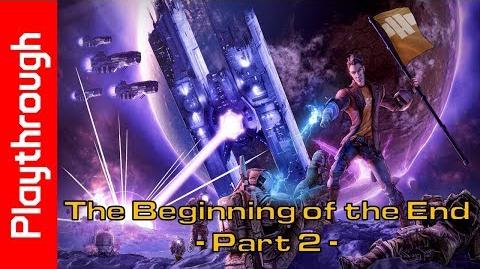 The Beginning of the End - Part 2 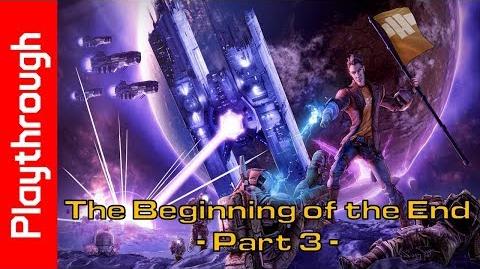 The Beginning of the End - Part 3
Retrieved from "https://borderlands.fandom.com/wiki/The_Beginning_of_the_End?oldid=461533"
Community content is available under CC-BY-SA unless otherwise noted.