View source
watch 01:19
What is The Bee?
Do you like this video?
Play Sound

The Bee, while having low shield capacity and a long recharge delay, gives extraordinary amp damage with zero shield drain per shot. This effectively provides endless amp damage until the user takes damage from an outside source, making normally infeasible synergies extremely potent. Due to this, The Bee is best used with a weapon with a high rate of fire and large magazine size, as more amp damage can be put out in a shorter span of time before one gets damaged. Shotguns are less desirable because the amp damage is divided among all pellets and not applied per pellet.

The Bee is also deadly with multi-shot spread weapons (e.g. Unkempt Harold and Sand Hawk), as the amp damage is not shared between each projectile as it is on weapons with a yellow damage multiplier. This can allow for quick farming of bosses and even quicker with 'Slag and swap' tactics or enemies with large critical hit locations.

The Bee is also extremely effective with Vladof pistols, as their large magazine sizes, which can range from twenty to nearly sixty bullets, coupled with their fast firing rates, can easily make them effective weapons with the shield. This works even better with the Infinity as it effectively provides an endless number of amp shots at no cost. 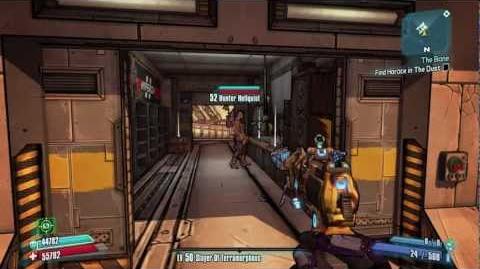 Borderlands 2 - How to Farm The Bee Fast (Drops in the Video)
Deutsch Français Українська
Community content is available under CC-BY-SA unless otherwise noted.
Advertisement