The Beard Makes the Man

The Beard Makes The Man is an optional mission given by Claptrap in the Mines of Avarice in Tiny Tina's Assault on Dragon Keep.

A mission-specific gun, the Grog Nozzle, appears in character inventories while this mission is active. Shooting a dwarf with this gun induces drunkenness in them, and this is represented by a name change where the word "Drunk" is added as a prefix to their regular designation, and also covers them in a purple sheen. The best way to get them drunk is shooting them in the head (critical) with Grog Nozzle.

Drunk dwarves must then be lured to a crusher, where switches at each end will activate the machine and crush the dwarf. They must be drunk before they drop their beard pieces.

The beard pieces are then taken to a forge where three of them must be laid down and hammered to form a single magic beard. This is then collected and returned to Claptrap for the reward. 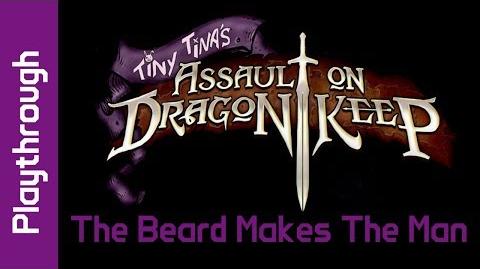 The Beard Makes The Man
Retrieved from "https://borderlands.fandom.com/wiki/The_Beard_Makes_the_Man?oldid=432887"
Community content is available under CC-BY-SA unless otherwise noted.