The Arid Badlands is an area in Borderlands where the Vault Hunters first arrive at the beginning of the game. Later the small part of area appears at the end of Claptrap's New Robot Revolution.

It is a vast area of rocky desert/savannah populated by various species of skags and rakks. Much of the Badlands is controlled by bandit tribes, mainly Sledge and his followers.

The Arid Badlands, at one point in time, was a very productive industrial park owned by Dahl. The main area of note now is the nearly abandoned town of Fyrestone, a once booming community now experiencing a steep economic decline. The Badlands also contain an old Dahl gravel processing plant and a still-operational wind farm, supplying much of the electricity to the nearby settlements. It is also very close to Headstone Mine.

Fyrestone is the first town the player encounters, and the main hub of the Arid Badlands. Formerly a booming Dahl mining town, its inhabitants have been almost wiped out by the local wildlife and marauding bandit tribes. However, the town is still equipped with all types of Vending Machine, as well as a bounty board. The sole remaining citizen of Fyrestone is Dr. Zed, who runs a small clinic.

The entrance to Fyrestone Coliseum is located in a bandit camp on a hill to the southwest of Fyrestone proper. A red weapons chest in the camp can be a convenient supply point for early characters looking to improve their equipment.

This area features in:

Groaning Hollow is a subterranean arena operated by Rade Zayben. Located about halfway along the main road between Fyrestone and the Dahl Headland gate, it is accessed by way of an underground bridge over a deep chasm, and is furnished with all three classes of Vending Machine near the arena entrance. A basic outpost New-U station, also just outside the arena, yields a quick re-spawn point for deceased gladiators. The arena itself is a roughly circular battleground surrounded by several skag cages, plus an observation deck on one side.

Howling Defile is an open area in the rock north of Titan's End. A wind turbine sits near a hibernating Rakk Hive and a path up around to the left of the defile offers a limited vantage point. The skags that live in the defile can be sniped from the top of the path with impunity, as they seem unable to reach anyone attacking from the top.

Piss Wash Gully is an open sewer with a jump ramp on the Eastern side. The ramp can be used as a fun alternative to following the road out of Fyrestone and also serves as the barrier separating the low level region of the Arid Badlands to the more challenging areas further West.

Outpost Arid Hills is located next to the Arid Hills transition point. This is where Shep Sanders is located. There is a Catch-A-Ride and a Med Vendor here. The outpost acts as a secondary hub for the Arid Badlands, as Shep has several story missions.

A small clifftop homestead owned by T.K. Baha, T.K.'s Claim is a short distance south of Fyrestone. It has a vegetable patch out the front, complete with its own scarecrow. There is also a red chest concealed out the back of the dwelling, which becomes accessible when the front door is unlocked. A steep rock formation nearby can be ascended in an Outrunner if the bottom of it is hit at high speed with the boosters on. Launching off the top usually drops the machine into T.K.'s vegetable garden, and is good for 3 seconds of air time towards the Hang Time challenge.

Titan's End is a Fast Travel outpost also equipped with a Catch-A-Ride station. Located in the west of the Arid Badlands on the main road, it serves as a convenient access point to many of the missions in this zone. It is across the road from Howling Defile, and is also near a very large bandit outpost built around the skeleton the outpost is named for. This area used to be Patricia Tannis's first dig site before it was overrun by bandits.

Zephyr Substation is a wind farm in the south of the Arid Badlands. The wind turbines here provide power to Fyrestone and New Haven, although they have been overrun by bandits since Dahl withdrew. The bandits have built their camp around the station office in the south. Skags and rakk live along the edges of the wind farm.

The Headstone Mine Entrance features in: 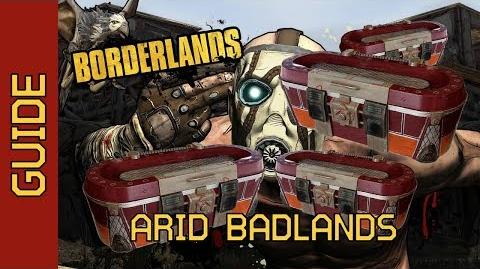 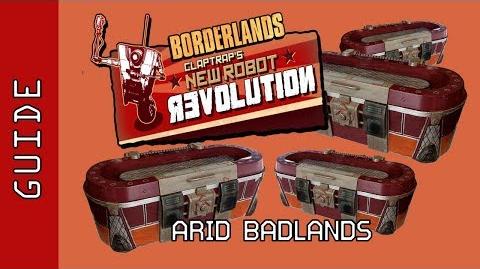 The Arid Badlands appears again at the end of Claptrap's New Robot Revolution DLC, for the final show down with the bosses, the Interplanetary Ninja Assassin Claptrap (INAC) and the Mega Interplanetary Ninja Assassin Claptrap (MINAC). The only area available in this version of the Arid Badlands is the bus stop at the start of the game. However, due to the arrival of the MINAC, the motel has been destroyed/crushed, creating various amounts of cover from the boss.

Retrieved from "https://borderlands.fandom.com/wiki/The_Arid_Badlands?oldid=481284"
Community content is available under CC-BY-SA unless otherwise noted.