Instead of becoming Crippled, Wilhelm says a corresponding line and a yellow-tinted User Interface appears on his screen. He is then allowed to walk at a reduced speed and fire his weapons normally. Additionally, being close to enemies will deal constant shock status effect damage to them. At any point during Termination Protocols (or if the timer runs out) the user can choose to detonate Wilhelm's power core and create a giant incendiary explosion. A second wind can be achieved by killing an enemy with the shock damage-over-time or the power core's explosion, alongside conventional means of achieving a second wind. 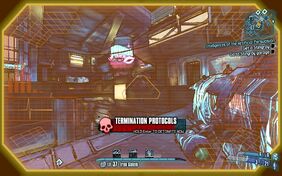 Retrieved from "https://borderlands.fandom.com/wiki/Termination_Protocols?oldid=474125"
Community content is available under CC-BY-SA unless otherwise noted.