In Borderlands 2 onwards, Tediore is known for producing disposable weapons which, instead of being reloaded, are thrown away and explode. The power of the explosion produced is proportional to the amount of ammo left in the weapon. New weapons are digistructed directly into the Vault Hunter's hands, loaded with ammo from the character's inventory.

Tediore prides itself on being the common-man brand, providing cheap and accessible guns to all. Fittingly, their marketing focus has always been family-oriented and comparable to real-life budget companies, with advertisements that boast the affordability of their guns and encouraging their customers to buy their weaponry in bulk. Tediore guns are affordable to the point that a handful of their guns could be bought for the price of a single firearm from any other company, which also applies to the prices of their guns in-game, as they typically sell for the least amount of money. While their budget builds come at the cost of inferior stats, Tediore's fast reloads prove one thing: when the user's main firearm runs empty, the simple advantage of having a loaded gun in their hand can be the user's saving grace.

Tediore guns are built cheaply and are therefore manufactured with inexpensive, lightweight material like plastic or fiberglass, in comparison to most other corporations, which use metal and timber. The sheer disposability of Tediore guns is made even more apparent from Borderlands 2 onwards, as their firearms are single-use without visible magazines. When depleted, the weapon is thrown and explodes.

Throughout all games, Tediore's involvement in the story has been minimal: there are little to no missions that involve visiting Tediore-owned locations, their leaders are never encountered in person, and they have never been presented as an antagonistic group.

However, due to their manufacture of cheap and affordable products, Tediore has a reputation of being an inferior brand that is referenced in Borderlands 3:

Tediore guns have reduced damage, as well as increased spread. This usually makes them inferior compared to the weapons from other manufacturers, and not so well suited as a primary weapon. However, they have exceptional reload speed and excellent swap-in and swap-out speed. This makes them excellent as emergency side-arms. For example, a Tediore Anarchy will never match a Torgue Anarchy in terms of firepower. But, in certain cases, (like in the case of a skag ambush) the Tediore submachine gun will become operable (swapped in, loaded and ready to fire) faster than the Torgue submachine gun.

Except for rocket launchers, any ammo present in any other weapon type is permantently lost, but the resulting damage scales with the amount of remaining ammo. The reload damage not only scale with the ammo thrown away, but also with grenade damage, which make Tediore weapons most effective on characters focusing on it.

This may mean that even though Tediore weapons are known for their mediocre qualities and that the character loses ammo left inside the gun when manually reloading, they may be utilized by Gunzerkers with ammo regeneration abilities to quickly deal out massive amounts of damage in combination with their action skill. In addition, Tediore shotguns also have their effective range drastically increased, as throwing the shotgun at enemies at medium distance is much more effective than traditional shooting. 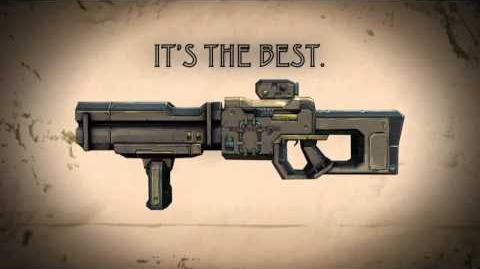 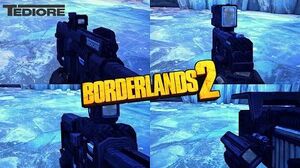 In addition to their full range of common pistols, submachine guns, shotguns, and rocket launchers, Tediore products in Borderlands: The Pre-Sequel include items listed below.

As before, Tediore weapons are thrown and explode like grenades when reloaded. However, lasers behave differently when reloaded: they will always deal shock damage (regardless of weapon element) to nearby enemies in a manner similar to Tesla Grenades while in flight.

Tediore retains its gimmick of disposable guns with quick reloads, with new guns being digistructed in the user's hand. Their mediocre stats have been further reduced, especially on their submachine guns and pistols, making them perform notably worse compared to other companies. However, their reload throws have been heavily expanded with a variety of delivery methods. With the correct modules and tactics, reload thrown Tediore guns can dish out significantly more damage than being fired as a typical firearm, and some can even perform as room-clearing tools through the use of homing MIRVs or walking turrets. The explosions of Tediore weapons will now match the element carried by the weapon, with very few exceptions (i.e. The Boo).

Like in Borderlands 2, some Tediore guns are crafted from cheap plastic, while higher rarity ones are made of fiberglass. Some models may feature an ammo counter. Tediore guns do not have a magazine part - instead, different parts on the weapon can increase its magazine capacity.

As an added aesthetic, Tediore firearms have firing sounds reminiscent of guns in 8-bit games. This becomes more prominent the more the gun is emptied, and ends with a short "depleted" sound effect. Thrown Tediore occasionally produce glitchy sound effects, and they will also vocalize with voice clips, with bouncing modules making short pain noises, and leg modules taunting enemies.

The effect of discarded Tediore weapons have been expanded.

All Tediores spawn with one module, which affects how the reloaded weapon acts:

Additional accessories can also spawn which provide additional effects on top of the modules found on all Tediores: