Does anyone know what the recorders say? My theory is they're backmasked and have static interferance, but I don't know the files well enough to extract the audio. Loony24680 23:29, January 28, 2010 (UTC)

This mission appear after 1st recorder. It's not given by bounty board. See also Bandit Treasure: Three Corpses, Three Keys (Given By Dead Bandit) D1g 23:25, April 4, 2010 (UTC) 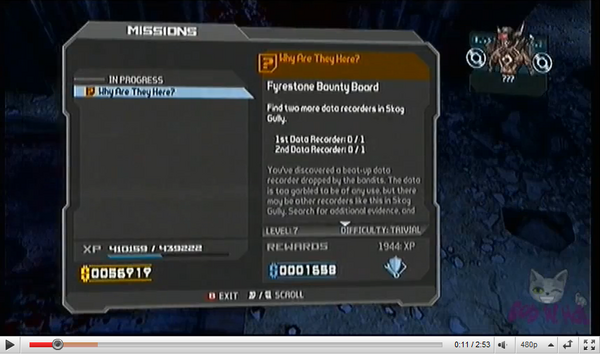 It's given by the recorder, but you turn in at the bounty board.

A user trying to learn how to get this mission will not be helped by "Fyrestone Bounty Board', since he would never find the mission there.

If you listen carefully, the second recorder sonds just like "Ah, hell did you just leap over pish wash gully in one of my runners?", but distorted. Does anyone have an idea if the other two recordings are like that? And should I put this into Notes or Trivia or something?

They all sound pretty much the same. I have never thought of running the sound through audacity (free sound software) but it might be a worthwhile endeavor. Notes or trivia needs to backed up by something more than speculation to endure.

this was done on gbxforums. i misremember the results tho.   Dr. F

Damn, I should get out more. I'll try and look it up.

The only thing that I found was that turning in the mission tells you what is on the recorders. I have not found anything on actual sound manipulation on the recorders themselves. The gbx forums are huge though...

I couldn't find anything either, but just watch a video about the mission and listen to the last recorder carefully. It really sounds like Scooter's ECHO. Auntarie 12:42, May 8, 2011 (UTC)

Hmm. If you think that there is something to it... I heard you can record the game on video with xfire then you can manipulate the audio with audacity. It would be cool if there is a hidden message in there!

Retrieved from "https://borderlands.fandom.com/wiki/Talk:Why_Are_They_Here%3F?oldid=192233"
Community content is available under CC-BY-SA unless otherwise noted.