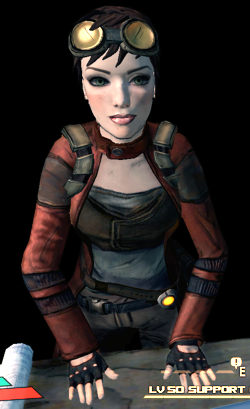 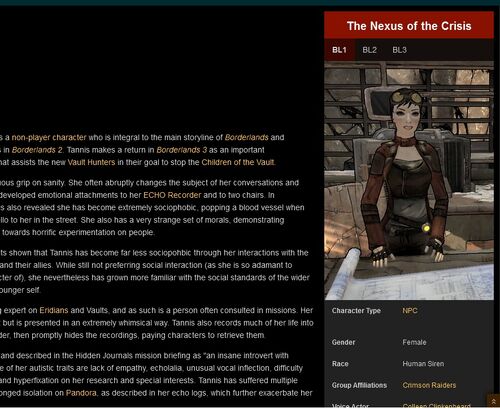 [there is one line she says near the end when you're in old haven after you saved her claptrap, saying something about her being safe and eating butter cookies and tea while your in danger or something, if anyone knows the full quote, could you post it here? :D Sniper Scyt 01:12, December 7, 2009 (UTC)]

"If the Lance are taking interest in what we are doing
then things just got a lot more dangerous. For you not for me, I am safe and sipping a nice chamomile. They know the legend of the Vault too and it is unlikely they will simply let you walk in unopposed and cheerful. Also, I have butter cookies!"90.202.16.44 14:50, February 1, 2011 (UTC)

Reading her quotes I noticed that one of them has the lines "Atomic Batteries to power, Turbines to Speed" that seems like a reference to the Adam West Batman TV show as that was what Robin would say as they power up the Batmobile before leaving the Batcave.--Kyuu19 (talk) 17:07, January 29, 2015 (UTC)

You think she betrayed you?

I don't know, but I think she betrayed you and was working with Steele before you even started helping her, since Dahl left her, and she was still getting supplies. The reason why she was in a prison cell in the Crimson Lance base was probably because she was no longer needed(Steele has the Vault Key). ForcedDj2010 04:32, January 14, 2010 (UTC)

I posted verbatim her ECHO journal entries using subtitle-enabled screenshots. I wish I'd looked at the Talk page first (D'oh!), but I'm glad that what I put down was accurate- at least as far as the subtitles are concerned. I'll complete the incomplete portions within the week.--Mensahero 15:35, August 14, 2011 (UTC)

With your permission, fellow editors of the Borderlands Wiki, I'd like to delete this section since all her recording are already up on the main page. --Mensahero 06:11, September 20, 2011 (UTC)

Has anyone noticed some crazy formulae and mad stuff in her cell?

It's right of her, zoom in and have fun!

Yeah I noticed this, looks like some easter egg comments from the developers. Very cool. ZoeyMithra 01:50, April 11, 2010 (UTC)

Shes not in the cell I have to turn in the talk to tannis mission and the way point is right on the cell,but she not there...what do i do? Nothing is happening when I go in front of it,I have went in a circle N led back to the same spot.

After you have completed pt 2 and bring the vault key to tannis this will be your "last" mission because you allways need to have a mission activated so gearbox choosed this one Karamos 14:29, April 8, 2010 (UTC)

in on the waypoint and tannis is not there, i do not know what to do, i have been puzzled for 3 days, and its starting to do my head in :@

"Talk To Tannis" is an obsolete mission. (It was probably due to take place at the end of the main storyline when Tannis was still in her cell.) The only way to acquire this mission is by joining a game with the host having this glitched mission in the log. The mission was removed from the plot, hence her interaction with the mission has been removed as well: most people receive this mission after the main storyline is complete, and Tannis would be in The Rust Commons West instead of in her cell in the Crimson Fastness, so it is not possible to talk to the correct NPC. Even acquiring this mission early will not let you turn it in, as Tannis is not coded to accept the mission anymore. The only way to get rid of this mission is to delete it manually. --Nagamarky 18:03, June 17, 2010 (UTC)

how do i manually remove it?

DLC4 is made of lies and broken dreams. Although, it is her proper title. I don't think it's that big of a deal, personally. But if you get enough people, I'll change it.

When Dahl pulled out from Pandora, they removed their funding of Tannis' research. By then, she had become completely obsessed with finding the Vault, so she turned to bandits to aid her research. After several more discoveries, she was betrayed and abandoned by the bandits.

Her ECHO logs indicate otherwise. She was alone (and going nuts) after Dahl abandoned Pandora. It's very unlikely for her to have had any friendly or professional relationship with any of the bandits on the planet considering she shot one in the back after he'd entered her camp. Baron Flynt working for her is either a) a lie, considering he never had a Vault key fragment when she sent you after him, or b) true, HOWEVER he was not a bandit at the time but likely a Dahl employee under her (consider: he'd only work with or for her while he got paid; when Dahl left the planet, not only did he lose his corporate salary but got the chance to become a bandit lord). As such, I'd like to change this section to more accurately reflect the story as presented in the game itself.

She has Aspergers Syndrome

"How did an insane introvert with Asperger's manage to survive in Sanctuary?"

Science is in the numbers

The audio logs and text for the second set (and possibly more) are mess up, I'd fix it myself, but, being new to editing Pages, I am afraid I would annialaite it, so someone give it the once-over, please? Professor Detective (talk) 21:03, November 3, 2013 (UTC) Professor Detective 11/03/13

Retrieved from "https://borderlands.fandom.com/wiki/Talk:Patricia_Tannis?oldid=458302"
Community content is available under CC-BY-SA unless otherwise noted.