Two particularly powerful Unique Mashers are dropped in the very early "Moe & Marley" skag killing mission. The more powerful of which is a level 13 with a 1.5x weapon zoom scope, with 31x7 damage, and accuracy of over 95(Also possible elemental damage). Although this weapon is only level 13, in a Hunter/Gunman's hands it can be useful up until early level 20s.

I once found a masher that fired 3 projectiles and had a 3-bullet magazine. Unfortunately I sold it before I realized its rarirty. -_- It was purple rarity, roughly 134x3 damage, 3 bullet magazine, 2.7 scope, 70 or so accuracy, forgot the fire rate though. I THINK it was a called "Brutal Masher". I have no proof unfortunetly... -icanhasatlas —Preceding unsigned comment added by Icanhasatlas (talk • contribs)

Mashers are all x7, no exceptions. Unless it's a modded weapon.  nagy   talk

You will not "Find" it again because it does not drop in game. If you do come across a Masher with x3 projectile count it will be given to you and it will be a modded weapon. The only legit Masher of any kind will have a x7 projectile count, no more no less. For futher info, check here. Veggienater 02:32, January 24, 2011 (UTC)

It should be added that they have generally low ammo capacity (mine has 2). Also, these are extremely useful against all forms of Bruisers and sometimes psychos. Useful against vehicles aswell

got to disagree Saph, no disrespect intended. if you build Mord up on the chance to fire two bullets out of revolvers every now and again with the mashers, you'll fire 8 rounds if it was a x7... just strafe, or shoot at a flat surface and keep counting the bullet holes... you will count more than 7 holes. i also have a desert masher with great damage (87x7) that is a six shooter. great gun. that masher and a 2 shot masher i had got me through the game from level 15...

In the second playthrough i have a masher that shoots 220x7 and regens ammo. Orange rarity. non-modded. Beast also because it a revolver instead of a shotgun its perfect for sirens like me

EQ prefix, and Equalizer title, or it's modded. Equalizers can have Masher effects, but the Equalizer title has priority, so if it's not called Equalizer it's a Mod. Yeti Yeti 03:55, February 18, 2010 (UTC)

I have to disagree, Yeti Yeti. I've got a DL10D Desert Masher with ammo regeneration, no EQ prefix. It is definitely legit: I don't play on line and I have no idea how to mod weapons (the only thing I've used Willowtree for is to increase my backpack capacity). It's a sweet, sweet gun: Level: 48; Dam: 259 x7; Acc: 71.4; RoF: 1.0; Mag: 2; 4.2x Weapon Zoom; -61% Recoil Reduction. If I was going to mod it I'd do something about the accuracy and the recoil, but even with those bad stats it's dynamite against most things except Crimson Lance Defenders. The ammo Regen isn't listed in the weapon stats, but it regenerates fast enough that it's back to full ammo by the time it reloads. Outbackyak 15:59, June 2, 2010 (UTC)

Woops - my bad! It's not the Masher which has the ammo regen - it's my Gunslinger Class Mod! I didn't notice the Class Mod has ammo regen, since it's not listed on the card. So probably Yeti Yeti is right, and only EQ prefix Mashers can have ammo regen. Outbackyak 16:27, June 2, 2010 (UTC)

Edit: It seems the enhanced accuracy stems from a boost to proficiency accuracy.

Note: Since a Masher fires a cluster of projectiles, they have a "wider" range of damage and are therefore more likely to hit a target.

I've recently picked up a (Jakobs) AX11 XX Savage Masher (solo game) in Jakobs Cove. It's purple, although the only text modifier it carries is -34% damage, I've noticed it has a knockback effect (extremely pronounced on FranknBill). I've been using Mashers for awhile and haven't noticed knockback on any of my other Mashers. Is knockback unique to Jakob's Mashers, do all of them have it, and are there any tradeoffs? (By tradeoff, I mean does the knockback modifier take the place of what could have been +dmg, or a scope, or w/e)--Ocdscale 22:12, December 23, 2009 (UTC)

Ive noticed a knockback effect on several guns (most noticeably double anarchy, but also fastfiring smgs and machine guns), i personally think that there is bullet physics at work (supported by velocity/spiral/bouncing bullets) and that the knockback is not an actual knockback but just the bullets imparting force to the targets, this would be more noticeable with a masher beacuse of amount that hit at once, and the damage done

I believe that Jacob weapons are the only weapons that produce knockback. I think they have to fire multiple shots like a shotgun or a masher revolver. There is a major knockback on a Jacob masher that i have.

Knockback is a part of one of Jakobs materials properties (Gold+Wood). It gives a knockback attribute to every bullet that weapon fires, but with single-bullet weapon it is unnoticable - if there is more than one pellet (like x7 on mashers or x7-x11 on shotguns) then knockback of each pellet addsup and results in a large knockback. The most famous Jakobs shotgun - Sledge's have its knock because of that it fires 2 shots with 11 pellets at once which results in 22 pellet's knockback sum.Sinael 07:08, March 5, 2010 (UTC)

All Jackobs weapons with XX in the name have knockback.

You won't notice two pairs of numbers pop up, but you should be able to notice that sometimes you do much more damage than expected. This is easiest to confirm on big, slow, soft targets (so you can take your time and examine the numbers)--Ocdscale 02:13, December 15, 2009 (UTC)

I'm not sure if this is already known or not, but I've obtained a lvl 48 Savage Equalizer that apparently also has the Masher attachment (137x7 damage), even though it's not specified in the name. So I'd assume it's possible to get the Masher accessory on every kind of legendary revolver? --Pup42512n

No, those are legit. The chimera and defiler have an accessory as the Orange part so they can't be mashers, but masher Dahl Anaconda, Tediore Equalizer and Jakobs Unforgiven are all confirmed possible. --Raisins 04:36, December 26, 2009 (UTC)

Got an amazingly powerful masher 251 by 7 6 bullet clip accuracy's a bit crap though...

I used to have a Savage Equalizer but sold it after I found a really rare (dark orange)Burning Equalizer that does more than 800 damage. That doesn't sound that impressive but trust me, it rapes bandits and bruisers because of the fire damage (x3). I also have a Desert Anaconda that does more than 450x7 damage, shoots 1.9, and has a nice sight on it. It replaced my old one, although the old one was green and when you aimed (it had no sight) the back of it looked like snake skin : ) 4.246.206.216 23:58, July 20, 2011 (UTC)McRedidyred

I use these mashers all the time and this is the best one ive ever seen. (the accuracy isnt good but i have 50 pistol Proficency and im using a hunter. and gunslinger class mod so that really does not matter.

Uhh my Masher is better than any of these on here if you wanna find out the stats message my gamertag - RoG Envy. (XBL).

What is the most powerful Masher anyone has found? I've recently acquired a 348x7 / 89.1 accuracy / 1.0 fire rate one, which is absolutely amazing. The damage output (pistol-focussed Mordecai with high-end Gunslinger mod) is phenomenal.

I have one similar to that, but it does 332 x 7 with 88.6 accuracy and a 1.9 fire rate. i have a couple great gunslinger mods and it does dominate. I know it doesnt do more damage but the fire rate is a lot higher

Maybe it's not "stronger" because it's fir rate is terrible, but my DL300 ZZ Savage Unforgiven does more damage per shot and is scoped. I'll follow it up with th stats on my EQ10-B Savage Equalizer since that's the one I would use:

I have found an AX Savage Unforgiven that has the following stats: 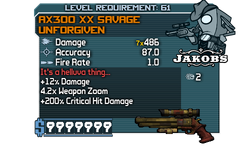 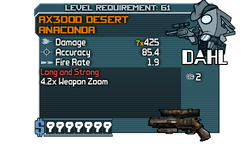 I would kick a girl scout down a hill for that lvl 61 Masher. 480x7, thats insane. I think thats the highest damage Ive ever seen on a gun besides a 2shot jakobs shotgun. (which can get upwards of 500x12)

I have not been able to get a 500x12 shotgun in gearcalc so far.

Just added an AX10-B Swift Masher to the list that dropped off Crawmerax. Gearcalc says it's legit for me (although it also adds an extra dollar and gives it +3% Reload speed) and also says any other possible prefixes are illegit, So as far as I am aware for a pure "Masher" Revolver it's the best possible. --Kiiper 17:46, December 30, 2010 (UTC)

You can get more damage out of it with barrel4 instead of barrel5 albeit with a drop - but relatively small compared to typical masher spreads - in accuracy.  nagy   talk

Correct, it is the Jakobs Skullmasher. I never knew there was such a thing as a masher sniper, so I went kinda crazy when I found it. No one on this talk page seems to want to talk about it. So, I thought it could be an interesting topic.—Preceding unsigned comment added by 76.178.182.100 (talk • contribs)

Besides the fact that things like profiency and skills would only benefit a revolver and not a shotgun, why would anyone use the masher over a good shotgun?

mashers get 100%+ critical hit damage like all revolvers, making very effective if you aim for critical hits. also a hunter will find mashers much more useful than shotguns if he has points invested in gun crazy (doubling projectile count to 14 instead of 7 sometimes) and is using a gunslinger class mod/ranger class mod to speed up fire rate or critical damage. it just depends on the situation.

1. Shotguns have terrible accuracy compared to a masher, mashers usually have ~90 accuracy while even Hunter prefix shotguns only have 68-72...

2. Mashers usually are more powerful than Hunter's Shotguns.Talk to prinny!

1 - Hyperion shotguns can go into the 80's. S&S can go up to 70. Hunter's shotgun's aren't great. Either get an Assault Shotgun, or a Materail3 shotgun with a title that overrides the Hunter Title.
2 - More powerful... Per shot. Shotguns usually have higher fire rate, and a further +100% fire rate from proficiency, giving them approximately triple the fire-rate.
I'd say all in all, they share traits, but aren't the same weapon.
Also: Assault Shotguns and Hunter's shotguns are very easy finds, Mashers aren't. Use what you find... happypal (talk • contribs • inventory) 11:13, May 15, 2011 (UTC)

Most powerful masher so far?

Is that the most powerful one so far? Not modded,as I bought it off a vending machine offline :)

Jakobs Unforgiven Mashers can hit the low 500s x7. And btw that 67.7 accuracy is pretty terrible for a MasherTalk to prinny!

I picked one up off of Crawmerax with the following stats:

I don't see such a combination on the list, but I got it from soloing Crawmerax back when I was level 50-ish. Glitch, maybe?

It's not level 48. Level 60 is more likely. Unequip it, then take a look at its level in your inventory. Level requirements for items that you have equipped are indeed glitched. Dämmerung 02:48, January 21, 2012 (UTC)

Retrieved from "https://borderlands.fandom.com/wiki/Talk:Masher?oldid=227652"
Community content is available under CC-BY-SA unless otherwise noted.