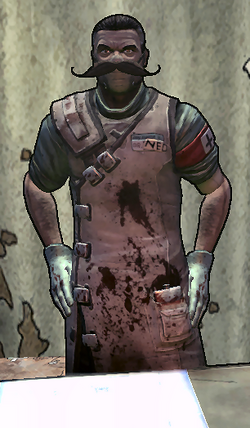 it has to be zed

this guy has to be Dr. zed, his nametag is basically the same and the n is a z upside down, and don't say that u still see zed in new haven because u also still see dead T.K. in fyrstone, even after meeting him, so there is flaw's, regardless i swear this guy is dr zed, he just has to be, there's to many things like, my brother Dr. Zed, who is totally not me in a disguise, is too goodie too-shoes(was in a holotape somewhere, probly not exact) regardless I'm about 92% sure its zed.Toolazytomakeaaccount 10:56, December 25, 2009 (UTC)

First of all Dr. Zed and Dr. Ned are two entirely different people. Second they are brothers and they make it clear they are brothers. The fact of the mustache is of pure comedy. Even though it says they are not related the website says they are. I would reveal more on the matter but i do not want to give it away.

Ever hear the phrase "Protesting too much"? They go so far out of their way to stress that Zed isn't Ned that they practically stumble over themselves doing so, making it come across that they really ARE the same guy, and are making a deliberately unconvincing display to say otherwise. Then there's the obviously pasted on fake mustache, since facial hair cant grow through a facemask. They may as well be saying outright "Ned and Zed are absolutely, positively, in no uncetain terms ten trillion percent the exact same person." Why go through the deliberately hamhanded denial if they really aren't the same guy? It makes no logical sense. Doug Exeter 09:55, February 2, 2012 (UTC)

Totally different. Therefore, they're not only different people, but not even real brothers. They're totally unrelated, it's merely a classic doppelganger.

also the eyes are different

Easily could be Dr. Zed, technically.

Remember, Marcus is telling a story in both the main story AND in the Jakobs Cove DLC. In other words, he could have just gotten lazy and decided to reuse a character from the last story he told. This also explains T.K. Baha's mysterious presence in the Arid Badlands as well as Hallow's End - they're seperate stories, so it's technically a "different" T.K. -- Claptrap 02:14, January 11, 2010 (UTC)

I agree with you in this. I think its just Marcus tell kids (his or not) a story trying to scare them while useing real people for the characters. Then later the kids he told the stroy to went around telling other people and thats why Zed knows about it. AND Marcus could have used a real location for the setting of the story and thats why there are ads for the varius places there. The "mad scientist lab for rent" could be what its intended to be used for or its a joke by Marcus. SuperMario2 00:12, August 31, 2010 (UTC)

I'm not sure if this is a glitch or not, so I'm looking for someone to tell me if it is. After completing "House of the Ned", I went up to Dr. Ned, who was behind his counter, and tried talking to him. Instead of getting anything listed under his quotes, he said: "Now, I'm not one for compliments, but...you did fine," a quote of Dr. Zed's when you turn in a mission to him. (I may gave messed up the quote a bit, but you get the idea.) I guess what I'm asking is: Has anyone else seen this? Would this be purposeful (Gearbox saying they're one person), a glitch, or just reusing the quotes from Zed, since they share a voice at least. -- Claptrap 02:36, January 12, 2010 (UTC)

could it be that the whole dr.ned looks like zed is a joke? they ARE brothers obviously, just one is evil, (and,apparently, glichty)

Putting an end to some shit

Obviously Zed is Ned but during a full moon, he grows facial hair and turns evil

No, Knoxx's Armory does NOT take place before Zombie Island. If you talk to Zed in T-Bone Junction in the 3rd DLC, he'll talk about the events of the 1st DLC. The only way he would know about Zombie Island is if DLC3 takes place after DLC1, whether as a story told by Marcus to orphans or as something that really occurred.--Mensahero 12:25, July 7, 2010 (UTC)

I can't find the listed quote, but I remember something like "That didn't happen." being attributed to him. Anyway, there's also the fact that General Knoxx acknowledges the zombie infestation in one of his tweets (2010-02-09, 16:33), as well as the posters advertising the Mad Scientist's Lab for rent in T-Bone Junction. Neither would be possible without DLC1 happening before DLC3: 1st, for Corp. Reiss, either Hank Reiss or his brother, to report of actual dead rising up, then the events of DLC1 had already happened; 2nd, for Ned's lab to be available for rent, it would have to be emptied- if DLC3 happened before DLC1, then he'd still be present and occupying the said lab. Okay, he had up to 4 different laboratories in Jakobs Cove (office on the docks, tree house, Dead Haven and Lumber Mill), but renting out any of them would expose his activities (as stated in the ECHO you find in Jakobs Fodder (mission)). I admit I don't have DLC3 because it's not available in Asia, but you (if you have DLC3) can always just go up to him in T-Bone Junction and talk to him to try to see if he says something. You just come close to him and interact several times to get all the lines he repeats. I did that to get all the quotes of the characters during the different stages of the original playthrough, and I'm certainly going to do it if I ever get my hands on DLC3. Besides- given Gearbox's sense of humor, it wouldn't be surprising at all to find that Ned is totally different from Zed and actually is Zed's evil brother.--Mensahero 16:07, July 7, 2010 (UTC)

Retrieved from "https://borderlands.fandom.com/wiki/Talk:Dr._Ned?oldid=220122"
Community content is available under CC-BY-SA unless otherwise noted.