Any way to enlarge it?

No, that is not true... they must both be able to access the stash by being in sactuary or being on a higher playthrough in the beginning of the game. The stash is separate from the character files in the save data and they are just items although the item level still applies, you may put them on lower level characters.

You need to post several pics to do a citation like that. You also need to specify your system and restart your session afterward to see if the glitch can be corrected. The pics should show items deposited and items not being able to be withdrawn, plus inventory space left, etc.

Basically, you should post a complete record of the glitch. 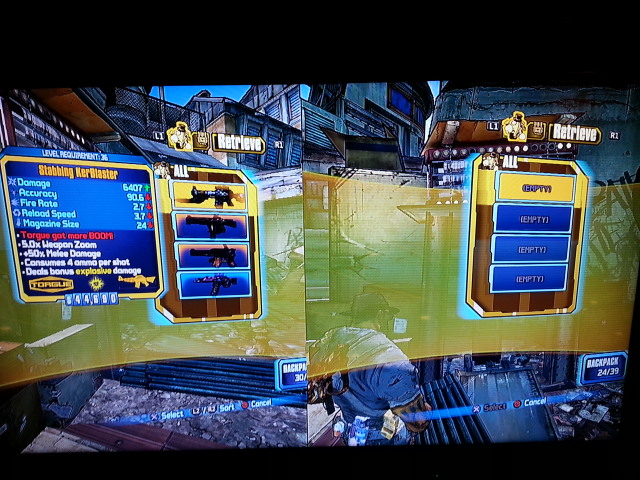 Oh, your doing split screen... Yes, you should probably get a save done before trying to retrieve the stash. The file that keeps the stash is separate from character files so will act funny. I would suggest taking them in one at a time for that.

Ok I will try that here in a minute and see what happens. One the times I did this I put some stuff in the Krieg stash (the one on the right) and quit the Krieg character, now as you can see when I reloaded him its all gone, just disappeared. --Deirwolf (talk) 05:30, May 7, 2014 (UTC)

Ya, there is a single file that stores golden keys, badass points, last character selection, and claptraps stash for the game (maybe more?).  Then there are individual character files that store everything else specific to the character. Playing around with split screen is probably tricky because there are 3 files that must work correctly with saving and the 1 is common to both.

On a side note, dropping them to the ground and picking them up should work unless your game crashes (just make a backup before you do if you have a jump drive).

Retrieved from "https://borderlands.fandom.com/wiki/Talk:Claptrap%27s_Secret_Stash?oldid=437740"
Community content is available under CC-BY-SA unless otherwise noted.