Tales from Elpis is an optional mission in Borderlands: The Pre-Sequel.

The first ECHO story is suspended high above a narrow ledge overlooking a river of lava. This is too high to jump to ordinarily, but there is a gas vent beneath it that can be activated when the rock blocking it is destroyed. The gas vent offers enough lift to boost a character to the height of the ECHO recorder, but Vault Hunters will also need to steer back to the safety of the ledge, whether the device has been retrieved or not, due to the risk of falling into the lava.

The second ECHO recorder is much easier to retrieve, although kraggons are in the area, and will likely attack.

The final ECHO recorder drops from the Son Of Flamey, a kraggon that must be killed to satisfy Janey's lust for revenge. The Son of Flamey is a much tougher opponent than the smaller kraggons previously fought. Oz kit boosting helps to avoid its attacks.

"Once upon a time, a dashing Vault Hunter straight up murdered a beast that had lava for brains. The end." 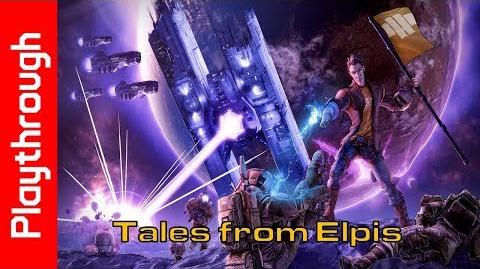 Tales from Elpis
Retrieved from "https://borderlands.fandom.com/wiki/Tales_from_Elpis?oldid=432946"
Community content is available under CC-BY-SA unless otherwise noted.