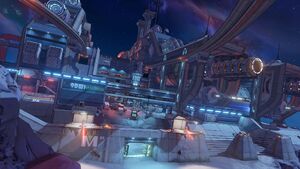 Takedown at the Maliwan Blacksite is a free downloadable content release for Borderlands 3. It is the first in a planned series of Takedowns, special endgame missions designed to challenge up to four players at the level cap.[1]

Retrieved from "https://borderlands.fandom.com/wiki/Takedown_at_the_Maliwan_Blacksite?oldid=470749"
Community content is available under CC-BY-SA unless otherwise noted.